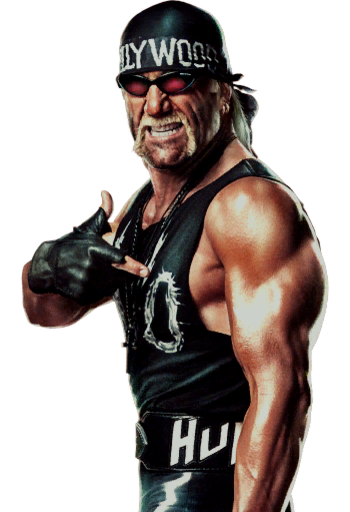 "As far as I'm concerned, all this crap in the ring represents the fans out here!"
"I'm the kinda guy, right now, if I needed to sneeze I'd use your hand. That's the kinda guy I am. So it doesn't matter to me if I'm gonna be wrestling George Steele, or I wouldn't even mind crossing the fence, because I have no friends in this business."
— Jake "The Snake" Roberts addresses

You're the heel, BOO!

A Heel is a bad guy in professional wrestling. He's a Hate Sink, existing to make the crowd angry and menace their favorites. They are typically the antagonist of a pro wrestling storyline or "angle." The opposite of a heel is a Face.

Note that hate comes from a desire to see the heel punished and set back, distinct from X-Pac Heat, which skips that step and simply wants someone gone entirely, which is itself distinct from a heat vacuum, where the crowd neither pops nor boos, they just sit absolutely silent for their entrances. At this point he/she should just hang up the boots because they don't even elicit a response.

The Lucha Libre equivalent is known as a rudo. In theory, rudo is more an 'attitude' about Lucha Libre as a whole, but in practice rudos are almost always interchangeable with heels.

Just as fans will only root for a strong or resourceful babyface, they won't boo a heel unless he has certain qualities. Common heel types:

1. The Chickenshit. Bog standard heel from the golden age. (You know the type, the ones who kept Fred Blassie in business.) They cheat a ton, exaggerate about everything, change the rules each time they lose, use bystanders as shields, and win on technicalities. Plus, they have that punchable face which is damn-near a blueprint for Cheap Heat.

The Honky Tonk Man made a career out of being a cowardly heel. Seth Rollins following his heel turn has really brought that old-school feel back.

2. The Narcissist. Overinflated, good-looking heel. They know they are better than anyone else on the roster, and that adds to the ego, which gives them great heat. They talk shit constantly, and fans actually pay money with the hopes of seeing them lose. (Which is a win/win for the company.) But instead of running away, using steel chairs, or calling for interference, they back up their words with action. They take on the #1 contender and either demolish them or go down swinging. For examples outside of wrestling, see Tito Ortiz or Conor McGregor in UFC. If they were pro wrestlers, they would be heels in this mold.
Rick Rude was probably the best vain heel of recent history, but you could make a good case for The Miz.

3.
Advertisement:
Gorgeous George. The spiritual father of all polyamorous wrestlers, George Wagner invented the modern concept of the heel and pro wrestling itself, in addition to having a big influence on sports in general (see "Real Life" entry). The stuff he did was pioneering, from having the ring and the referee "purified" with disinfectant to that time when he stopped a match just so that he could have "Florida Air" imported to him via air canister. In Lucha Libre, there is a similar gimmick known as "Exóticos"

, but they are more likely to be babyfaces.
Every wrestler who wore feather boas to the ring or played up their sexual ambiguity, from Hard Gay to Joey Ryan, was inspired by Wagner. But you will remember the name of (deep breath)...

4. The Foreigner. Foreign accents signal to the audience that you won't be getting much mic time. So why not make it work for you? Just keep bringing up local differences and claiming that your country's better. "Your local sports team is unsatisfactory!" "The inhabitants of this city have a higher level of body odor than average!" "I almost forgot to mention that all your local women are overweight and unattractive!" The natural predator and rival of the All-American Face, or the local equivalent thereof.
PUTCHOO EEN DE CAMEL CLUTCH MEHK YOU HUMBEL *belch*. It's also how a lot of gaijin get over in Japan; just look at Bullet Club.

5. The Psycho. Often more a danger to themselves than to others, nevertheless capable of going great lengths to prove no one is tougher than them. Several wrestlers created the prototype for a particular type of heel. Incidentally, this was the pre-steroid age; by the '80s, everyone was pretty gassed up working for Vince, but in the territories, heels still looked like ordinary tough guys. Dr. Death, "Dirty" Dick Slater, Ray "The Crippler" Stephens, and Bray Wyatt today—those guys don't look like male models who watch what they eat. They look like hard-drinking men who you wouldn't want to meet in a dark alley.
Jake "the Snake" could teach a class on the art of being a psycho heel. Apparently there's a good reason to call Dean Ambrose "The Lunatic Fringe".

6. The Bitch. Female heels used to fulfill one of two roles: scary hag or big bruiser. (See The Giant, Brawn Hilda, or "Psycho" above.) A good female babyface is a potential role model for young girls, so her clothes are meant to convey tradition and athleticism. Everything about the bitch is alluring: provocative entrance poses, boob zippers, illusion netting simulating nudity, and so on. They lean toward the 'woman of loose morals' stereotype (homoeroticism included), pompous attitude, and an obsession with shiny things.
Sherri was as much of a threat on the outside of the ring as inside, and really seemed to delight in watching the wrestlers she managed hurt people. AJ Lee is an anomaly because, though she was a jealous bitch in-character, she got over without focusing on her looks.

7. The Monster. "From Parts Unknown...", a menace capable of demolishing top stars, modern heroes, and legends of the industry. Usually doesn't talk much. The idea is to sell them as a threat without having to compete to be "the best" in the main event scene. They mainly fight against guys below their height/weight class, whether it be in tag team or singles action. Having a 'small' guy who can defeat the big guy on an even playing field is a great way to build them up. Note that the Monster has considerable overlap with The Giant and the Wild Samoan.
It was just so easy for kids to hate Earthquake. He steamrolled face after face, squished Damien (Jake's pet snake), and didn't really get his comeuppance until Hogan came back from injury. Kane has wrestled under eight or nine "Monster" gimmicks.

8. The Authority Figure. A rich asshole with their own federation. These people hold positions of power (often real, sometimes kayfabe) in the promotion itself. They can pull off the "I have an entire Wall Street investment firm backing me" vibe, along with some very-serious suited men who accompany them because they have to keep tabs on their investment.
The Corporation was the gold standard of authority figures in the 1990s. And ever since, it seems like every wrestling company has to have one. Dario Cueto is atypical in that he's a professional actor who gets paid to promote Lucha Underground, and thus is considered one of the best.

9. The Enforcer. More often then not, a bodyguard/powerhouse in a wrestling faction, usually implied to be tweener or anti-hero. It's similar to when the cops radio for some backup muscle for when things get too out of control. They can lure their opponents into a trap and let their bodyguards do some wreckage.
Arn Anderson dealt punishment and protected the other Horsemen, earning the nickname "The Enforcer". He was efficient and brutal in the ring, but it was all professional. Chyna was Triple H's personal henchwoman who rarely talked but would twist you into a pretzel if Trips told her to.

Special mention can be made for Managers (sometimes known as valets). It's implied that they're handling the business side of their client's career. And let's face it, most people in the world who can cut great promos are not good athletes. (And some of the best in-ring workers are terrible on the mic!) Managers can also have stories and be compelling characters in their own right. When Rusev made his debut, Lana spoke for him, and Rusev looked to her when he was getting beat by a tough opponent. Lana also offered sex appeal, and became involved in two different love triangles (in kayfabe) with Rusev, first with Dolph Ziggler and later with Bobby Lashley.

Virtually all the heel managers, from Mr. Fuji to Father Mitchell, are chickenshit. That's because most of them went to wrestling school but were too small, or didn't have the right look. Same with a lot of referees. Of course, you have photographers like Jim Cornette and Paul Heyman, who hung around it for so long that they got roped in.note There are only a few babyface managers, and most of the time they came across as a hype man/cheerleader. But some of them are iconic such as Arnold Skaaland (who managed Bruno Sammartino), Bob Backlund, Cousin Slim of The Scufflin' Hillbillies, and Precious Paul Ellering of The Road Warriors.

The Color Commentator is often a former wrestler providing his expert opinions. Heel announcers usually end up taking the side of the bad guy, to better egg the fans on. Jesse Ventura, Jerry Lawler, the Honky Tonk Man, and Randy Savage are all former heels turned color commentators.

Heel champions didn't draw in Madison Square Garden the same way face champions do. The main examples of this are Buddy Rogers and "Superstar" Graham. Even Randy Savage, fairly or not, was running out of steam, and (for that matter) Ric Flair never took off in WWF, either. The only heel they ever pushed long and hard was Triple H, and it seems they've learned their lesson since then. Because while there's money in a babyface fighting off a swarm of heels, there's very little draw in a heel champion gobbling up faces the same way. Considering how many hours of television they have to fill, they need a constant stream of fresh challengers, and the best way to sort through them and draw money is with a babyface on top. It's a proven formula since january of 1984.

When a heel goes particularly over with fans, he may undergo a Heel–Face Turn. The Heel/Face Index has some more variations. See also the Tweener: a wrestler who flip-flops between Face and Heel status. (E.g. Triple H would regularly call out other heels for their reprehensible acts note JBL's racism, without becoming a babyface himself).