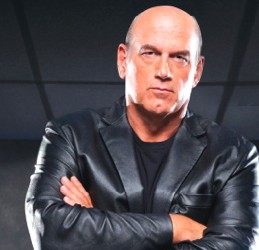 "My governor can beat up your governor"
— T-shirt popular during his term as governor of Minnesota.
Advertisement:

James George Janos (born July 15, 1951 in Minneapolis, Minnesota) is an American retired professional wrestler, actor, politician and broadcasting personality from Minneapolis, Minnesota. He performed in the American Wrestling Association and the WWF under the name Jesse "The Body" Ventura, a Heel, from the mid-1970s until the mid-1980s, when he had to leave the ring due to blood clots in his lungs (which he claimed were the effects of exposure to Agent Orange). At that point, he took up color commentary with both the WWF and WCW. He also competed in the NWA Central States territory in Kansas City, NWA Pacific Northwest Wrestling in Portland, OR and NWA Hawai'i. .

In 1987, Ventura appeared alongside fellow future governor Arnold Schwarzenegger in Predator. Ventura and Schwarzenegger would also appear together in The Running Man and Batman & Robin. In the same year as Predator, Ventura made a guest appearance on Small Wonder; he also appeared in the famous The X-Files episode "Jose Chung's from Outer Space".

In late 2003, Ventura hosted a show on MSNBC called Jesse Ventura's America. In 2004, he was inducted into the WWE Hall of Fame. He returned to broadcasting in 2009 with Conspiracy Theory with Jesse Ventura.

As for his in-ring achievements, he is a former AWA World Tag Team Champion

His life resembles that of Mike Haggar. No relation to Ace Ventura.

"These tropes ain't got time to bleed":

"This has been The Trope Shop. The pleasure was all yours."