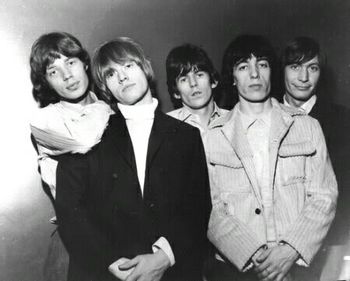 The Rolling Stones are a British blues-based rock band which has been described (first by stage manager Sam Cutler in 1969) as "The World's Greatest Rock and Roll Band" and has been doing its best to justify the description for more than half a century.

The Stones were formed in London in June of 1962, when guitarist and original leader Brian Jones recruited pianist Ian "Stu" Stewart, soon followed by vocalist Mick Jagger, who brought along guitarist Keith Richards. After a series of fill-ins, bassist Bill Wyman joined in December 1962 and drummer Charlie Watts joined in January 1963, completing the first stable line-up. After the band recruited Andrew Loog Oldham as their manager, Stewart was removed from the official line-up, as Oldham felt that six members were too many, and Stewart was the odd one out image-wise. However, Stu took the demotion admirably well and continued to work with the band as road manager and main pianist and keyboardist until his death in 1985.

The band's early recordings largely consisted of covers of American blues and R&B songs, while their earliest self-penned numbers were credited under the collective pseudonym Nanker/Phlege. After first achieving success in the UK with a cover of Lennon and McCartney's "I Wanna Be Your Man" in late 1963, they crossed the Atlantic as part of the first wave of The British Invasion in 1964. However, their first U.S. tour was famously a disaster, with the Stones having no major hit to tour on, getting mocked by Dean Martin on national TV, and regularly failing to sell tickets well. Their big breakthrough came in 1965, when their singles "The Last Time" and "(I Can't Get No) Satisfaction", as well as their third album Out of Our Heads, shot the Stones into superstardom on both sides of the pond. By this time, Jagger and Richards had taken the leadership role from Jones in the group, largely on the strength of their now-fertile songwriting partnership.

Starting with their 1966's Aftermath (Album), the songs of Jagger and Richards, aided by the instrumental experimentation of Jones, expanded the band's ever-present stylistic flexibility. The experimentation continued through 1967 with the baroque pop album Between the Buttons and climaxed with the polarizing album Their Satanic Majesties Request and single "We Love You". 1967 proved to be an important year for the Stones, who came close to breaking up. Jagger, Jones, and Richards were all hit by drug busts, which would have a devastating impact on Jones in particular. Oldham, who had worked as their manager and producer since 1963, quit around this time, feeling that his partnership with the band had run its course. This led to the Stones self-producing Satanic Majesties.

In 1968, the band recruited Jimmy Miller as record producer and chose to return to a back-to-basics approach to their music after the psychedelic excesses from the previous year. Beggars Banquet proved to be the last hurrah for Brian Jones, who was hit by another drug bust, and stopped making major contributions to the band's music. His health had also been affected by drug use, and as a result of the drug busts, he was unable to gain a visa to tour in America. Jones's final contributions to the band were autoharp on "You Got the Silver" and percussion on "Midnight Rambler" from Let It Bleed. Matters soon came to a head, and Jones was forced to leave the band he had founded and named, replaced by Mick Taylor. Jones sadly drowned in his own swimming pool several weeks after his departure, and just a few days before Taylor had his first gig with the band—at Hyde Park, which was transformed into a tribute concert for Jones. Taylor recorded five studio albums with the Stones (including Sticky Fingers and Exile on Main St., which along with their two predecessors are widely regarded as one of the greatest four-album streaks in rock music history) before quitting in 1974. Former Faces guitarist Ronnie Wood stepped in, became an official member in February 1976, and has been with the band ever since. Wyman quit in 1993; bassist Darryl Jones, who is not an official band member, has worked with the group since then.

They have released 23 studio albums in the UK (25 in the US), 19 live albums, and numerous compilations; and have sold more than 200 million albums worldwide. Sticky Fingers from 1971 began a string of eight straight studio albums that charted at number one in the United States. In 1989, The Rolling Stones were inducted into the Rock & Roll Hall of Fame. In 2004 and again in 2011, they were ranked number 4 in Rolling Stone magazine's 100 Greatest Artists of All Time. Their image of unkempt and surly youth (originally cultivated in large part to contrast them with The Beatles) is one that many musicians still emulate. The band's attitude and style were major influences on Hard Rock, Heavy Metal, Punk Rock, and Alternative Rock bands that followed them.

For the Heinlein novel, see The Rolling Stones (1952).