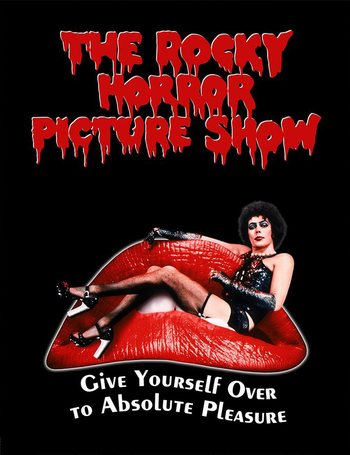 Those nylons never had it so good.
''"I would likenote You would, wouldn't you?!, if I maynote You may not!, to take younote Where?/Take me, take me! on a strange journey...note How strange was it? So strange they made a movie about it! Not the book, the movie!"
Advertisement:

The Rocky Horror Picture Show is a 1975 musical film written by Richard O'Brien and directed by Jim Sharman. It's most famous for still being played in theatres all over the world once a week, and for having a fanbase that dresses up, throws stuff at the screen, re-enacts the scenes and generally indulges in Audience Participation. The film is based on the stage musical The Rocky Horror Show, also by Richard O'Brien (who played Riff Raff both in its original staging and this film).

The story: Brad Majorsnote Asshole! and Janet Weissnote Slut! are two lovely, naive virgins from Dentonnote The Home Of Happiness!, U.S.A., who get engaged and drive off to tell Dr. Scott, their former teacher. However, on the way there, they get a flat tire and find themselves outside a stereotypical Haunted Castle ("It's probably a hunting lodge for rich weirdos"note Rich weirdos aren't in season, asshole!)... and that's where things get really, really, reeaaaaaaaaalllly weird.

They meet the servants, handyman Riff-Raff and his "most beautiful note If she's beautiful, I'd hate to see the ugly ones! sister," Magenta the domestic, and groupie Columbia, who live with Dr. Frank-N-Furter... a "Sweet" Transvestite Mad Scientist, to be specific (from Transsexual, Transylvania). After being stripped down to their underwear, they are invited up to Frank-N-Furter's lab where he unveils his creation — the Brainless Beauty Rocky Horror.

At this point, Dr. Scott appears looking for his nephew Eddie, and Janet and Rocky are found together. Frank-N-Furter invites them all to dinner...

There is a pseudo-sequel, Shock Treatment (1981), focusing on the bizarre turns Brad and Janet's lives take upon their return to Denton after their adventure in Rocky Horror, but it was not as well-received as its predecessor. Its makers also weren't happy with how it turned out, due to many compromises made during its production, such as character recastings and a drastically cut budget. It also never really took off as an Audience Participation show due to its bigger cast of characters. It was released in 2006 on DVD, but the quality of the transfer isn't much better than the VHS tape or LaserDisc that preceded it.

There have been several remake attempts, none of which went anywhere, until it was announced that Fox was making a two-hour TV special

set for fall of 2016. The special has some pretty good names attached, including Laverne Cox starring as Dr. Frank-N-Furter

. as well as Tim Curry himself taking up the role of the Criminologist. That special, titled The Rocky Horror Picture Show: Let's Do the Time Warp Again, premiered October 20, 2016.

a different set of tropes

note But whatever shall become of Brad and Janet? Be with us next time for Shock Treatment or Revenge of the Old Queen!