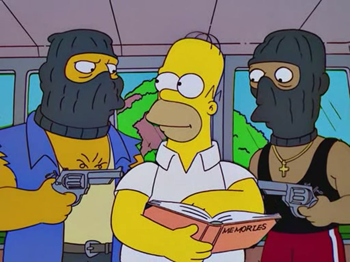 Malcolm: Don't you know about Stockholm Syndrome? You're starting to identify with your captors.
Reese: My captors?! These guys saved my life, man!
Malcolm: Only because they decided not to kill you!
Reese: Same thing.
— Malcolm in the Middle, "Reese's Party"
Advertisement:

is a phenomenon in which kidnapped victims can develop loyalty, sympathy, or affection (sometimes even sexual attraction) for a captor. In one way, it could be seen as a valid survival strategy wherein victims foster an emotional bond with their captor to reduce the risk of being harmed by them or others.

This can develop in kidnapping victims, political prisoners, and prisoners of war; or hostage situations when there is a long standoff with police (like the ever-popular bank robbery situation). It can also happen in abusive marriages or relationships, and has even been known to happen in prisons between prisoners and wardens.

It was originally named after a bank robbery that took place in Stockholm in 1973, wherein employees were held hostage for six days while police sieged the building. "Stockholm syndrome" was coined by the police criminologist working the siege to explain why the hostages seemed to be more trusting of their captors than the police, to the point of defending them and maintaining contact after arrest.

The full story is more complicated: in the years since, several of the hostages have described how the police were aggressive, unsupportive, and uncaring of them during the siege, and how their greatest fear was of the police suddenly escalating with deadly force and carelessly catching everyone in the crossfire.

Considering these facts, and the obvious conflict of interest of the person who coined the term, "stockholm syndrome" could be seen as a hand-wave to discredit victims who had valid criticisms of police conduct during the incident. More broadly, it could be used to unfairly accuse or blame a victim of perpetuating their own captivity — aka the "why didn't they do more to resist or escape?" argument — rather than viewing their attachment as an adaptive response to a traumatic and inescapable threat. Furthermore, a 2008 literature review of "stockholm syndrome" concluded that most "diagnoses" were made by the media and not by psychologists or psychiatrists, and that there was still widespread scientific disagreement about the specific symptoms, qualifying criteria, and assessment measures that could be used to diagnose it.

Still, in fiction and media, the idea of a captive falling in love with their captor is a popular one. Many of these stories feel forced, starting with captivity and jumping straight to love. The most realistic depictions of Stockholm Syndrome in this manner of the story include not only the kindnesses, but also the extended time needed, and clear isolation from outside influences.

Where a villain intentionally attempts to induce Stockholm Syndrome, it is most likely one of the subtropes such as More Than Mind Control. If played for fanservice, it becomes Romanticized Abuse.

The reverse situation, Lima Syndrome, is considerably rarer but definitely exists. In any story featuring The Svengali, expect at least one of the two to make a showing.

If left untreated in Comedy, may result in the captor shivering in the corner, mumbling "Take it away! Take it away!"

For more about this syndrome in Real Life, see Analysis.

See also: Being Tortured Makes You Evil, Blank Slate, Conditioned to Accept Horror, More Than Mind Control, Rousseau Was Right, Nurture over Nature, Then Let Me Be Evil and Not Used to Freedom. If the person incorrectly believes that they're in a sexually abusive situation, or is still adjusting to being out of one, they may ask Aren't You Going to Ravish Me?.

Not to be confused with Stockholm Syndrome, a game made by Antony Kos.

I Got the Stock, Holm

In "Family Time", after spending two month with Dr. Weitzman, the Smiths developed Stockhom Syndrome and they want to return to his buffet.

I Got the Stock, Holm

In "Family Time", after spending two month with Dr. Weitzman, the Smiths developed Stockhom Syndrome and they want to return to his buffet.