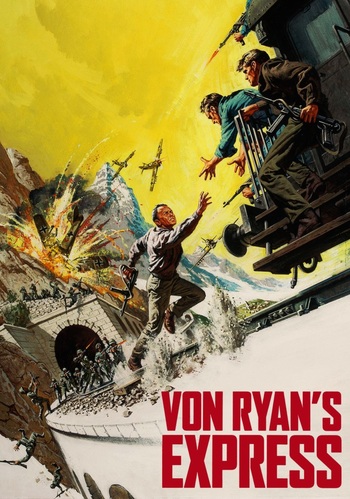 Von Ryan's Express is a 1965 World War II adventure film based on a novel by David Westheimer, directed by Mark Robson and starring Frank Sinatra and Trevor Howard.

Col. Joseph Ryan (Sinatra), an American fighter pilot, is shot down over Fascist Italy and thrown in a P.O.W. Camp there, where he becomes the new ranking officer among the Allied prisoners. He soon earns the enmity of the mostly-British prisoners, who derisively nickname him "Von Ryan" for his initial concessions to the jailers, spoiling previous escape preparations in order to improve current conditions for the prisoners.

Despite proving that he's willing to both push their jailers and suffer for his beliefs, the name catches on when Ryan spares the life of the camp commander in the wake of the Italian surrender, which leads to the POWs being recaptured by the Germans, who load the survivors on a train headed for a German camp. In the shadow of the Italian Alps, Ryan and the British POWs take control of the train; trapped behind enemy lines, their only option is to pretend to still be under German control and avoid suspicion while heading for neutral Switzerland. But it's not long until the Germans are in hot pursuit.

While making the film Sinatra met his future wife Mia Farrow (29 years his junior), who was shooting the TV show Peyton Place on the same lot.