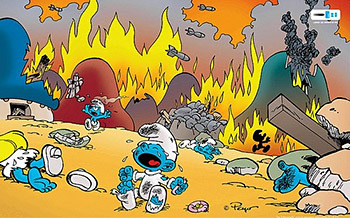 A rather brutal message from

UNICEF.
"Pepperland is a tickle of joy on the blue belly of the universe... It must be scratched."
— The Blue Meanie, Yellow Submarine
Advertisement:

Oh, how beautiful a place is the Sugar Bowl! As are the Ridiculously Cute Critters that live in it. The best part? Even when menaced by Mr. Meanie, nothing bad will ever happen!... Right?

Not quite. A popular subversion and parody of the Sugar Bowl setting and its cutesy residents is to have their pwecious wittle town get faced with some of the most horrific and hilariously realistic of tragedies and disasters, basically breaking hell loose upon their land. Whether it's "Mr. Meanie" going stir crazy, invading armies, wars, firestorms, or other acts of Powers That Be, the residents will suffer for their adorableness with pain and despair.

The inverse of this parody is when the cute critters decide to take the offensive. Whether they're really a gang of Killer Rabbits, or secretly evil and planning to conquer our world, they mean our heroes harm in lovably cute musical numbers.

Yet another inverse is when someone throws a Genesis Effect at the Crapsack World, possibly changing it into anywhere between a World Half Full or even a full blown Sugar Bowl.

It should be noted that this can be played seriously in the case of a Vile Villain, Saccharine Show or Knight of Cerebus making themselves known. In this case, it's not for parody and is instead showing the new villain is not to be taken lightly. Done right, this version is normally downright heartbreaking.

See also Subverted Kids' Show, Superweapon Surprise, Crapsaccharine World, Surprise Creepy, Troubled Backstory Flashback, Dangerously Garish Environment, and Horror Comedy. Vile Villain, Saccharine Show is when the show has a villain that by all rights should cause it, but doesn't... most of the time. Art-Style Dissonance is practically a requirement.

Contrast No Endor Holocaust, where, by all rights, the actions of the main characters should have led to massive destruction and death, but didn't, because The Word of God says so.

Has nothing to do with someone on a destructive sugar rush (though this could conceivably be the outcome) or sugar being used as an accelerant.