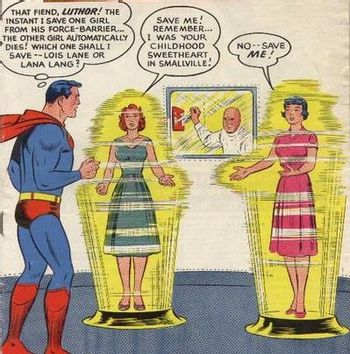 This is how you hurt the Man of Steel.
"Spider-Man! This is why only fools are heroes — because you never know when some lunatic will come along with a sadistic choice: let die the woman you love... or suffer the little children! Make your choice, Spider-Man, and see how a hero is rewarded! [..] We are who we choose to be...now choose!"
— Green Goblin, Spider-Man
Advertisement:

This is a situation in which a character is presented with a choice, any outcome of which causes something bad to happen. It could be a hostage situation wherein, if one victim is saved, the other(s) die; or it can be a choice to save one's loved ones or save the world. The hostage variant is often called "Sophie's Choice," after that novel and film.

However it is set up, it presents a Moral Dilemma that will inevitably cost the hero something that they hold dear unless they Take a Third Option. However, if the writers are just as sadistic as the villain, no third option will be possible, and Tonight, Someone Dies. This is guaranteed to set the Hero into Angst Mode, and gives a villain optimum gloating time. Plus, it's fun to watch them squirm!

Often the choices represent facets of a hero's life that are in conflict, such as whether his loved ones are more important than his ideals/cause, whether he likes Betty more than Veronica, to what lengths he will go to conceal his Secret Identity, whether he is willing to kill to save something he cares about, whether he will betray his allies to save lives, or sometimes even whether his principles are worth his life.

When it's a choice between two people, one or both of them will often encourage the hero to choose to save the other. This is also a good time for the villain to put the hostages in separate Death Traps with a timer that guarantees that he can only save one of them. If someone decides to choose for someone else, see Making the Choice for You. Many villains in this scenario are not above pulling a You Said You Would Let Them Go on the character once the choice is made, just to be a complete bastard.

Given it's such a hard choice, it's no wonder most good guys tend to Take a Third Option. It's practically unheard of for a hero to actually make this choice, and have it carried through before either the villain breaks his promise or the cavalry manage a rescue. If the one offering the choice benefits regardless of what the chooser chooses, it's a Xanatos Gambit. If both choices lead to the same outcome anyway, then it's a Morton's Fork.

A Suicidal Sadistic Choice is a subset where one presented option is death. Compare Friend or Idol Decision, Hostage for MacGuffin, Scylla and Charybdis, Take a Third Option, I Will Punish Your Friend for Your Failure. Contrast The Window or the Stairs. A classic Moral Dilemma.

(If, on the other hand, the character rattles off an answer to the dilemma before the villain even finishes talking, they're making a Quick Draw Decision.)

Merrik, knowing that neither Obi-Wan or Satine have what it takes to kill him, mocks them by asking who will brand themselves a cold-blooded killer? Cue Anakin's lightsaber emerging from his chest, complete with a snippet of the Imperial March playing in the background, hinting at his fall.

Merrik, knowing that neither Obi-Wan or Satine have what it takes to kill him, mocks them by asking who will brand themselves a cold-blooded killer? Cue Anakin's lightsaber emerging from his chest, complete with a snippet of the Imperial March playing in the background, hinting at his fall.