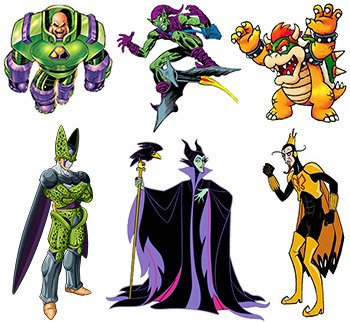 The Dress Code of True Villains.note  Left to right: Lex Luthor, the Green Goblin, Bowser, Cell, Maleficent, and the Monarch
Fan: Why do so many of Spidey's villains (Green Goblin, Doc Ock, Mysterio, Electro, Vulture, Sandman, Lizard, etc.) wear green, yellow, or purple? Are these colors symbolic in any way?
Stan Lee: Sure, Brad, they're symbolic of the fact that our high-priced fashion coordinators, after lengthy consultations with their colleagues, Armani and Hilfiger, felt those colors would be the best ensemble to delineate the grotesque gestalt of those particular naughty people. (By the way, I was referring to Melvin Armani and Irving Hilfiger, of course.)
— Stan's Soapbox, published in Fantastic Four vol 3, Issue 21, September 1999
Advertisement:

Sometimes even the bad guys want to wear bright colors. All those deep blacks and bloody reds can get monotonous after awhile. Unfortunately, the heroes have already monopolized the primary colors so what's our poor villain to do?

Why, crack out the secondary colors, of course.

Green, or green and purple together are especially popular among the Super Villain set. This is likely due to them being bright, eye-catching, and an easy contrast with the reds and blues favoured by so many early superheroes. Green and purple can have negative cultural associations (see Green Is Gross, Sickly Green Glow, and Technicolor Toxin), and in contrast to red or blue they inevitably come across as less desirable. Orange tends to be used less and is frequently an accent color as it can be a bit harder to distinguish from red or yellow depending on the lighting. Black can still come into play as an accent, just as white sometimes would for the heroes.

A sub-trope of Good Colors, Evil Colors. See also Red and Black and Evil All Over, Evil Wears Black and Grayscale of Evil.

Compare Purple Is Powerful, Purple Is the New Black, and Green and Mean. Contrast its inversion, Primary-Color Champion.