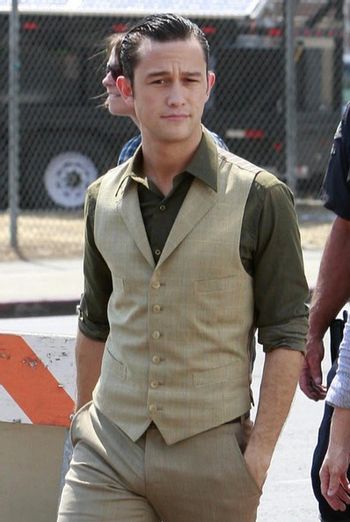 True Fact: His regular wardrobe got him the part in Inception.
"Dignity, and even holiness too, sometimes, are more questions of coat and waistcoat than some people imagine."
— Charles Dickens
Advertisement:

For when taking your coat off is too revealing and wearing a trenchcoat is just too much.

The waistcoat is an article of clothing that has been around since the Restoration in England. In the United States, it is called a vest (in UK English, a vest is the equivalent of the American tanktop). A waistcoat provides extra warmth, an extra layer, and extra pockets (for that most important of gentlemanly accessories, the gold pocket watch).

Depending on the waistcoat, characters wearing them can seem especially stylish, pretentious, or eccentric. Or all of the above. Wearing a waistcoat in more modern works can strike the perfect balance between being suave and kicking ass. It is often the sign of Tall, Dark, and Snarky.

A relative of Badass Longcoat and Badass in a Nice Suit. If it also protects you from gunfire, it is a Bulletproof Vest, and the two tropes may overlap.