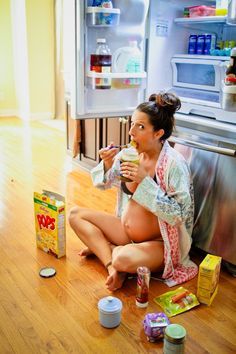 Elliot Stabler: I've got to get home. My pregnant wife has a craving for peanut butter and tacos.
Chester Lake: Say no more.
— Law & Order: Special Victims Unit
Advertisement:

A Pregnancy Trope. During any pregnancy, at some point the mother will experience cravings — however, they will never be cravings for any standard foodstuff (such as pickles, ice cream, etc), but will instead be cravings for the most hilariously inappropriate and mismatched foods (chocolate covered kippers, boiled eggs and ice cream, peanut butter-dipped pickles, etc). Bonus points are awarded if the woman craves something that is (a) extremely difficult if not physically impossible to find; (b) isn't actually food or (c) both.

The trope often involves the father being roped into visiting late-night markets at 3 AM in search of that particular brand of pickled radishes and pistachio-flavored ice cream. Usually, this state of affairs will result in the father being stretched to breaking point to find the necessary goods... only to find, when he returns home, that the mother no longer craves it (usually without so much as a "thank you for traveling across five states and climbing a mountain to get it").

A case of Truth in Television — some women actually do crave inedible things or unusual foods during pregnancy — but it tends to be exaggerated in fiction. In many cases, a woman doesn't even have to be pregnant. Some are prone to wild cravings during "that time of the month," to the confusion of any men present. This is probably a milder form of a condition known as "pica"; those afflicted with full-blown pica will crave all sorts of bizarre stuff 24/7, regardless of gender.

Compare the Extreme Omnivore, someone who always eats this way (e.g. the aforementioned full-blown pica).

A rarer variant of this trope is where the "wackiness" of the cravings has less to do with the substance desired and more with the sheer quantity desired. In this form of wacky craving, the comedy is how "eating for two" turns into something more like "eating for two dozen", where the pregnant woman becomes a voracious glutton who uses her pregnancy as an excuse to eat like a pig, thus turning even the primmest and most diet-minded expectant woman into a shameless Big Eater.

This may be a sign that Pregnancy Makes You Crazy. To a lesser extent, this also belongs to All Periods Are PMS.

"Goddamn, pickled croissants and Greek yogurt corn dogs? That baby sure knows how to eat!"

"Goddamn, pickled croissants and Greek yogurt corn dogs? That baby sure knows how to eat!"