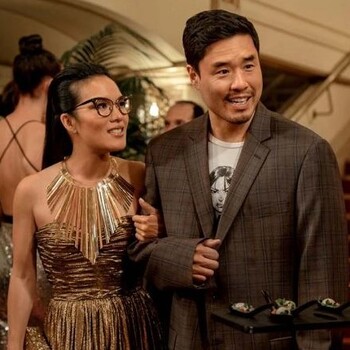 Television and movies are full of beautiful, well-dressed people. Even "ugly" people will be merely Hollywood Homely, and even "lame" people will be Cool Losers. There are entire makeup and wardrobe departments dedicated to helping ensure that this is so. Even a blue-collar wardrobe straight from Wal-mart will fit perfectly and be well-cared-for.
Advertisement:

Therefore, whenever this rule is Averted, there is always a reason.

This trope happens when a small flaw in a character's wardrobe, such as poor fit or cheap material, is used to show something about their character. This isn't about a homeless person or someone living After the End wearing rags because they have no choice. Nor is it about someone who lacks the time or motivation to dress well, or wears ill-fitting clothes as a purposeful fashion statement (à la the baggy pants trend of The '90s). It's when a character tries to dress nicely, but for whatever reason, they do not quite pull it off as well as they want to or think they do.

It could establish them as a minor slob, illustrate that they're a wannabe or Nouveau Riche dressing in a manner they're unused to, that they're trying too hard, or that they suffer a lack of attention to detail. Sometimes used to contrast one half of an Odd Couple with his better-dressed counterpart. Compare Seriously Scruffy, where a character is entirely unkempt because they just don't care, and Fake Fabric Fashion Faux Pas, Tacky Tuxedo, and Impossibly Tacky Clothing, in which it's not just the details that are wrong. If the character's wardrobe is supposedly cool in-universe, it's What the Hell, Costuming Department?.