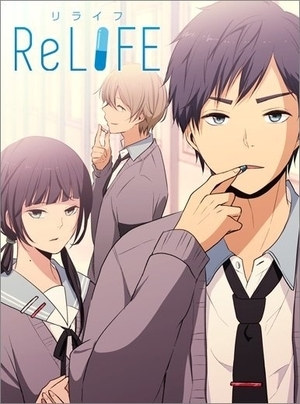 "How did my life turn out like this?"
—Kaizaki Arata
Advertisement:

ReLIFE is the story of Kaizaki Arata, a 27 year old man who can't find a job after quitting from his last company.

He meets someone named Yoake Ryou claiming to be from the ReLIFE Laboratory and is offered a mysterious drug that can change his appearance to that of a 17 year old. He becomes the subject of a one-year experiment, which aims to have people relive high school and see how they deal with it. If he completes the year, he'll be referred to a new company, but if he's discovered, the experiment will end and everyone's memory of him will be wiped.

Written by Yayoi Sou, the manga ran on the free manga app Comico from 2013 to 2018, and received a physical publication in 2014. An anime adaption was made for the Summer 2016 block, and in an unusual move, all 13 episodes went live at the Comico website simultaneously in late June, ahead of the original broadcast schedule. A four episode OVA to conclude the storyline was released in March 2018.