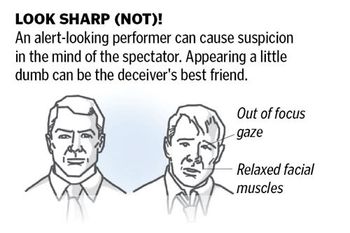 Advice for spies. And many others.
"It is sometimes the height of wisdom to feign stupidity."
— Cato the Elder
Advertisement:

Also sometimes known as "playing dumb", a tactic whose effectiveness is predicated on characters convincing others they are complete oafs and therefore harmless. Acting like an ignorant hayseed, misinformed tourist, Handsome Lech, Dumb Muscle, or Funny Foreigner is popular.

In many cases, a character pulling this off may play along until they're in a good position to drop the charade and get serious, usually catching anyone underestimating them badly off-guard. Another variant of this, primarily found in teen comedies, is the popular student (almost invariably a girl) who acts like The Ditz in order to avoid being stigmatized as a nerd; in such cases, the character may be willfully ignorant, but inevitably faces a situation where she needs her native wits to escape a problem.

This differs from the Genius Ditz in that the latter is brilliant in a single field (or multiple obscure fields) but genuinely ditzy otherwise. Another variant is of someone who is a genuine genius but who pretends to be The Fool in order to avoid responsibility, either because they are lazy or because of some trauma which has undermined their confidence. Perhaps they're a Genius Bruiser who prefers using their brawn over their brains enough that they look like a total Dumb Muscle at first glance. May appear to be The Fool until the viewer realizes he's just so good at making intentional actions seem like total coincidences that it appears to be blind luck. If done well, you may not be able to tell if the character is an Almighty Janitor, a Crouching Moron, Hidden Badass, a not-so-Inept Mage, or a Bunny-Ears Lawyer. Or, for that matter, Too Dumb to Fool, especially if the character is good at noticing what is too obvious to be seen.

A favorite tactic of The Trickster. The opposite trope is Feigning Intelligence. See also the Old Master, to whom using this trope comes as natural as breathing; Covert Pervert, where the "stupidity" may be in reference to a particular subject; and Rich Idiot With No Day Job, a special case of this trope. See also Fauxreigner and Bilingual Backfire. Compare Obfuscating Insanity. Blondes may exploit the Dumb Blonde stereotype to help with the obfuscation. Another tactic characters doing this will use is pretending to be Easily Impressed to make it seem like they have no sense of judgment of quality. A Good Is Not Dumb character is often accused of using this trope.

This can backfire in a big way if the person using Obfuscating Stupidity needs people to trust him or her—only to realize that no one will believe the "idiot". And beware the possibility of Becoming the Mask if the stupidity is held up for so long, a character begins to forget they have brains in their head. Inversely, if other characters think the person is being obfuscating but he really is simple-minded, then he's a Seemingly Profound Fool. Occasional lapses might be dismissed with Too Dumb to Fool.

This may lead to someone Underestimating Badassery.

This is not to be confused with Smarter Than You Look, where that trope has no intention of appearing to be unintelligent; the character simply can't help the appearance of stupidity they have.

This is Older Than Feudalism, occurring in the Book of Genesis and in legends of the earliest days of Rome. note In this context, the trope name refers to fake stupidity obfuscating the intelligence of the person. In other words, "obfuscating stupidity" is the method being used, a person is not obfuscating stupidity themselves. It is also the core of the 27th stratagem.

So the judge comes to the conclusion that the defendant can't be condemned and lets him go. Now the Amoral Attorney demands his money. But the client, again, just says "Bleh!"
Amoral Attorney: Are you joking? You promised me four gold pieces! I want them now!
Client: [tips on the table] Bleh, bleh, bleh, bleh!

She went back to the ditzy gimmick for quite a while afterwards. In a subsequent appearance, Bischoff flat-out accused her of using Obfuscating Stupidity based on what happened at his trial, saying she pretended to be "stupid and sweet" to curry favor from the crowd.