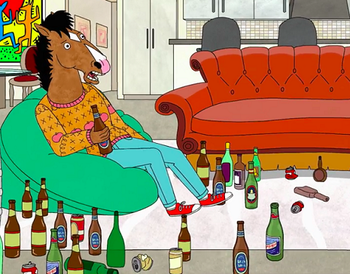 It takes a lot of beer to get a 1,200-pound horse drunk.
Alcohol, my permanent accessory
Alcohol, a party time necessity
Alcohol, alternative to feeling like yourself
Oh alcohol, I still drink to your health...
— Barenaked Ladies, "Alcohol"
Advertisement:

This person likes their liquor, and in large amounts. They may realize they have a problem, and get on and Off the Wagon, or they may be a Drunken Master, and this is merely a part of their "training", or a result of their — "skills".

Sometimes, this character is merely Drowning Their Sorrows and will bounce back later in the series. Other times, they've been this way from the beginning and have no plans to stop anytime soon. Worried friends may try to help by Nailing Them to the Wagon, though this attempt at forcing them to go Cold Turkey will result in delirium tremens

(hence why it is a tradition in psychology that when rehabilitating someone, do it step-by-step).

Real Life alcoholics are not always lying in the gutter — sometimes they are just people who drink alone, or for the sake of drinking, but never appearing to drink to excess (due to tolerance). Commonly, alcohol is drunk due to its effects as an anti-anxiety drug. It is entirely possible that successful people may be alcoholics on the inside. The High-Functioning Alcoholic

is proof that sometimes you cannot tell an alcoholic by mere appearance, and they may be in fact be in lofty professions such as law and politics (both highly associated with alcoholism; there are even specialized help lines and recovery networks for lawyers and judges needing help with alcohol and drug use). Hollywood, however, prefers the "Straw Boozer" form: someone wandering the streets in a stupor with a bottle in their hand is more obvious and pathetic than a high-functioning alcoholic who usually stays in their room with a glass in hand contemplating.

Many fictional alcoholics experience Pink Elephants — another trope that only loosely touches on the reality.

There is no known cure for alcoholism. Someone who has managed to quit the habit is considered a recovering alcoholic, and if committed to it, remains in whatever therapy he or she used to become sober. That said, there are people who quit without therapy, or who stay sober without therapy, as well as some (very) rare people who don't become sober but do become moderate and responsible drinkers (and their mere existence is controversial to the point of Flame Wars over whether they are "in denial" or if it really is possible to drink responsibly once having become addicted).

Note that making a Real Life actual alcoholic (as in a physically addicted to alcohol one, not just an emotionally addicted one or ordinary irresponsible drinker) go cold turkey is putting their life at risk, as alcohol withdrawal can lead to delirium tremens, which, if untreated, results in death. Physically addicted alcoholics must be tapered off of alcohol, slowly reducing the amount they drink, or weaned from it in a proper hospital setting where if they begin to go into delirium tremens, it can be treated.

The Always Female versions are Hard-Drinking Party Girl and Lady Drunk, but alcoholism is only one of her character traits. The Alcoholic Parent is a parent who happens to be an alcoholic.

Compare The Stoner, Drunken Master, Vodka Drunkenski, Hard-Drinking Party Girl, Off the Wagon, Beergasm, Quick Nip, I'll Tell You When I've Had Enough!, and Addled Addict. If the whole plot is about how a character became an alcoholic, it's an example of Descent into Addiction. Oddly, there are "alcoholics" who can get drunk off of milk. The Teetotaler is the direct opposite.

We also have a Useful Notes page on Alcoholism and Alcohol Abuse.

The Nerd is famous for using Rollin' Rock to come with playing shitty games.

The Nerd is famous for using Rollin' Rock to come with playing shitty games.