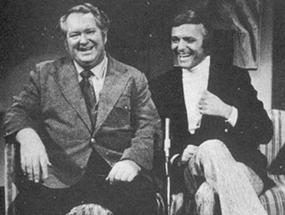 Hudson & Landry were an American radio comedy team from the 1970s. "Emperor" Bob Hudson and Ron Landry met at Los Angele's KGBS station where they become a popular morning duo. Together they recorded 52 comedy skits and received a Grammy Award nomination for their skit "Ajax Liquor Store".