Theatre / Merrily We Roll Along 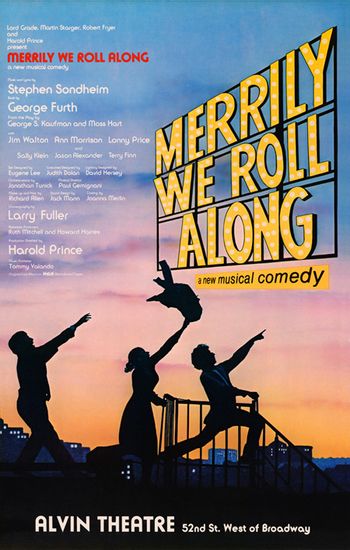 "Years from now,
We'll remember and we'll come back,
Buy the rooftop and hang a plaque:
This is where we began,
Being what we can."
Advertisement:

Merrily We Roll Along is a musical with a book by George Furth and lyrics and music by Stephen Sondheim. It is based on the 1934 play of the same name by George S. Kaufman and Moss Hart. Furth and Sondheim retained the basic structure and overall tone of the play but updated it to encompass the period from 1957 to 1976. The plot focuses on Franklin Shepard, who, in 1976, is a one-time composer of Broadway musicals who has become a highly successful but cynical and jaded film producer who has lost his friends, Charley Kringas (also long-time collaborator) and Mary Flynn. Like the play, the musical moves backwards in time showing how Frank has become the man he is today. The musical closed on Broadway after only 16 performances in 1981 and marked the end of the Harold Prince-Sondheim collaborations until Bounce in 2003. It's considered a Cult Classic by some people, and has seen occasional revivals, as well as becoming the subject of the documentary Best Worst Thing That Ever Could Have Happened

Merrily We Trope Along: