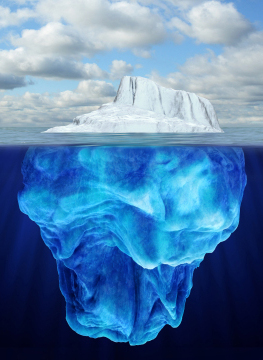 Beneath the surface lies something profound.
Idris: Are all people like this?
The Doctor: Like what?
Idris: So much bigger on the inside.
— Doctor Who, "The Doctor's Wife"
Advertisement:

People are rarely all that they seem at first glance. Without getting into An Aesop about books and covers and ugly ducks and swans and frogs that when kissed turn into robots, it's fairly true to say that people are mostly visually oriented, and go by first impressions. So when it turns out that The Big Guy who can bend steel bars is also a Harvard alumnus with a penchant for pontificating on the power of prose, people are justifiably taken aback.

This is not so much a character type being subverted as it is getting Character Development in unexpected directions. Much like Playing Against Type, it can be something that seemingly goes against the character type, or combines two different, seemingly opposite roles or characters into one more Round Character. The talent or quirk is rarely impossible for the character to have, just unexpected: people aren't just their job or surface personality after all. The Smart Guy who's a cooking wiz because he had to take care of his younger siblings, or The Ditz who's a Black Belt because her dad wanted her to be able to defend herself are two examples. Hidden Depths can be discovered in Back Story or organically as a story progresses, but if used improperly can crop up in a Plot Tailored to the Party to give a character the necessary skills. Why did they never mention it? "You Didn't Ask".

Of course, since these are common enough to have become a trope, they are less of a surprise than more — unusual depths. Indeed, some hidden depths are so common that making the surface and depth the same surprises the reader. In more extreme cases, a completely Flat Character becomes a Rounded Character.

If the audience is aware of the depths but not all the characters are, Dramatic Irony is almost bound to occur. If it happens gradually, it's essentially Flanderization in reverse. May be demonstrated when a character catches the Smart Ball.

For more examples, see the index.

Edd can play a string instrument.

Edd can play a string instrument.