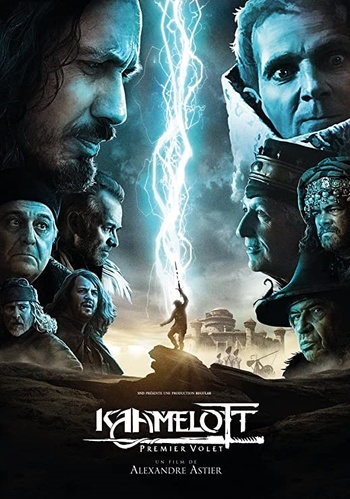 Kaamelott: Premier Volet (French for Kaamelott: First Chapter or Kaamelott: First Installment) is a 2021 French medieval fantasy comedy film written, directed and produced by Alexandre Astier and starring him as Arthur Pendragon. It is the long-gestating and long-awaited theatrical film sequel to the 2004-2009 Arthurian Legend-inspired comedy series Kaamelott, and is intended to be the first installment (hence the title) of a trilogy to wrap the story up. Most of the series' main cast (which means a lot) returned alongside some newcomers. It was released in France on July 21, 2021 after being delayed several times due to the COVID-19 Pandemic, and the UK saw a subtitled release on September 10 of that year.

Ten years have passed since Arthur Pendragon renounced the throne of Kaamelott and disappeared after handing it over to Lancelot du Lac, who has since established a reign of terror over the kingdom of Logres. The Knights of the Round Table have disbanded and formed pitiful pockets of resistance against Lancelot. Everyone wonders what happened to Arthur, from Lancelot (who wants him dead and put a bounty on his head) all the way to the clueless knights and oppressed smallfolk (who want him to return). But does Arthur really want to bother coming back to Kaamelott, help these morons once more and reclaim the throne? Short answer: HELL NO... but circumstances force him to anyway.

After announcing he was working on the second installment (which is due to start filming in spring 2023), Alexandre Astier also said he would like to explore the events that happened during the ten-year-long Time Skip between the end of the series and the first film, an installment potentially titled Kaamelott: Resistance, but he hasn't decided on which kind of media he'll do it yet.