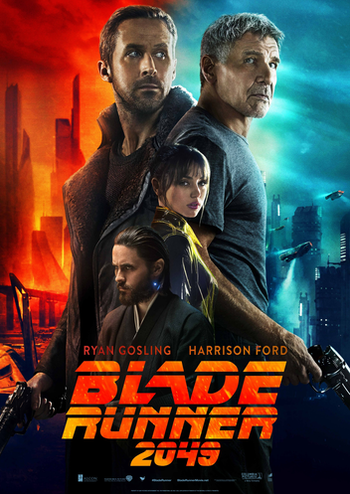 "The key to the future is finally unearthed."
Replicants are bioengineered humans, designed by Tyrell Corporation for use Off-World. Their enhanced strength made them ideal slave labor.
After a series of violent rebellions, their manufacture became prohibited and Tyrell Corp went bankrupt.
The collapse of ecosystems in the mid 2020s led to the rise of industrialist Niander Wallace, whose mastery of synthetic farming averted famine.
Wallace acquired the remains of Tyrell Corp and made a new line of Replicants who obey.
Many older model Replicants — Nexus 8s with open-ended lifespans — survived. They are hunted down and Retired.
Those that hunt them down still go by the name...
Advertisement:
Blade Runner

Its plot follows an LAPD Blade Runner known as Officer K (Gosling), who is tasked to eliminate pre-Nexus-9 Replicants. One day on a mission, K makes a discovery that leads him to a former Blade Runner, Rick Deckard (Ford), who has been missing for 30 years. While doing so, he unearths a long-buried secret that has the potential to plunge what's left of society into chaos. The ruthless Replicant manufacturer Niander Wallace (Leto), who bought out Tyrell Corporation and resumed its activities, is also deeply interested in this secret.

The project spent 15 years in Development Hell before being released on October 6th, 2017.

Three short films were made to fill in the gap between this movie and the first and expand The 'Verse a little. Their page can be found here.