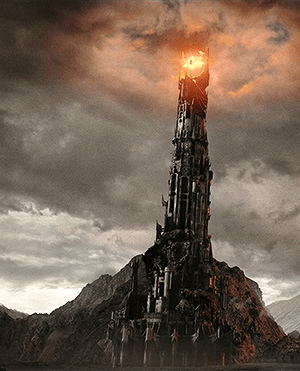 ...in the land of Mordor where the shadows lie.
"Then at last his gaze was held: wall upon wall, battlement upon battlement, black, immeasurably strong, mountain of iron, gate of steel, tower of adamant, he saw it: Barad-dûr, Fortress of Sauron."
— The Lord of the Rings: The Fellowship of the Ring
Advertisement:

After the Elaborate Underground Base, this is perhaps the most common form of a Supervillain Lair. A jaw-droppingly massive tower that, well, towers over everyone and everything around it.

In Heroic Fantasy, a castle like this, situated in Mordor or a similar wilderness, is often the home of the Evil Overlord.

In a modern setting, Corrupt Corporate Executives and Villains With Good Publicity usually roost in skyscrapers right in the middle of town, so as to flaunt their power.

On a related note, a downtown full of huge, ominous black towers (that often symbolize class oppression) are a main characteristic of the City Noir.

In video games, this building will almost always be The Very Definitely Final Dungeon, frequently involving It's All Upstairs from Here.

In mythology, often used in a desperate ploy by an Overprotective Dad to (unsuccessfully) prevent his daughter from getting pregnant. This results in a Girl in the Tower.

Because Evil Is Bigger, any towers frequented by the good guys will almost always be dwarfed by this. The villain in these cases is almost always male. Many come equipped with a Den of Iniquity for the Mooks during their downtime, and are not so well guarded against heroes who decide to Storm the Castle.

Such buildings are highly likely to be blown up, torn down, or set on fire. Sometimes, it's even all three at once.