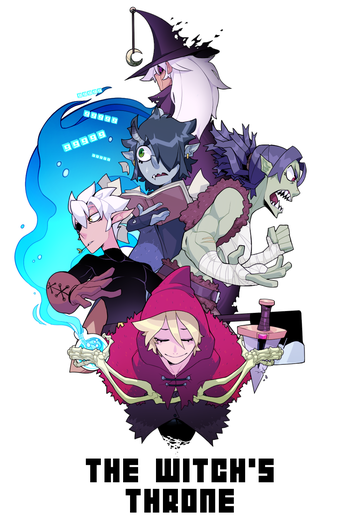 From down to upwards: Agni Arvelle, Grom Foster, Reksha, *add name here* and the Witch.
"The witch would mark her coming with a symbol of her might - a towering throne of bone and brimstone that ascended to the heavens, and signaled the end of the world."
— Agni Arvelle, recounting her mother's tale
Advertisement:

is a webcomic hosted in Tapas by WhatAHero. It debuted on August 27, 2017.

There is a prophecy in this world, where a girl is chosen every 10 years in a random month and day to become a Witch, a being with enormous magical power bent on destroying the entire world. She would use her newfound magic to raise an imposing throne over the world, to mark her coming. With her appearance, four brave heroes would rise to stop the witch and change fate, those who wish to become one of these heroes and join the journey to do so are called the Throne Seekers.

The Witch's Throne contains examples of: