I Just Want to Be Badass 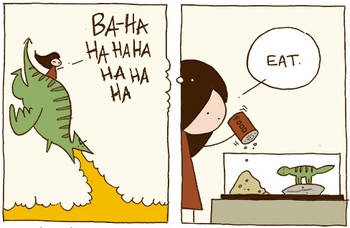 "I don't want help! I don't want to be the damsel in distress! I want to be the hero! ... I'm tired of being the lovable idiot, stuck in the tree while his friends fight for their lives! Don't you understand? If I can't do this on my own, then what good am I?"
— Jaune Arc, RWBY
Advertisement:

In order to fulfill this wish of their audience, the creator of a work will usually create a viewpoint character and, over the course of the story, make the character badass. This allows the audience to identify with the viewpoint character and as such experience badassery by proxy. Another way by which the author can fulfill this wish of the audience is to take a character that has already established his badassery and give the character a trait which the intended audience will identify with. Additionally, a writer can take a characterization with already-established badass credentials and remove non-badass elements in order to highlight the badassery.

On the other hand, this trope can be used in conjunction with Be Yourself, as we see a hero try to emulate more macho role models and fail miserably at imitating their machismo. At that point, they give up in despair and focus on what they can do, convinced that they are nothing special even as they learn some new knowledge or skills no one around thinks is important. However, when they are called upon to do what they have to for others, they find that those things they've learned have made them a near invincible Badass Bookworm who saves the day while the macho characters look on in astonishment.

An Escapist Character targeted towards the male demographic will often be a product of this desire.

This trope can, in Fanfic, lead to the creation of a Marty Stu. It is also strongly connected to a Power Fantasy (being a means by which this wish is fulfilled).

This trope is very prone to being deconstructed. A possible reason for this is that producers of media are usually not particularly badass and as such may regard this particular wish of the audience as immature or naive. This, of course, is merely a speculation. However, whole industries are built on playing this trope straight and allowing the audience to fulfill its badassery fantasies by proxy.

This can be akin to hanging a sign on your head saying, "Am looking for Deal with the Devil, apply within." Or an invitation for Training from Hell. It's hard to tell the difference at first...

Arguably, video games in general have a strong element of this as their appeal. Many FPS games do at least in part avert or subvert this, however. During some action games, there is a level where the game radically changes pace and becomes something different. For instance, an action game will toss in a stealth level where the player character is stripped of all their weapons. These levels are subversions of this trope and gain their impact from the sudden loss of power the player character has experienced. Survival Horror games often rely on averting this to generate fear in the player. Feeling powerful and competent is not conducive to feeling scared, frightened, alone and weak.

This trope applies in two circumstances. The first is that a character in the work is motivated by the trope (the in-universe version). The other is that the work engages with (fulfilling, parodying, or being to some extent motivated and/or changed by) its viewers Wanting To Be Badass (the meta-version). There is often considerable overlap between the two types; if this wish was not prevalent in viewers, they would probably react differently to characters motivated by the wish. The later is so common-place that only examples of playing with or subverting this expectation should be listed.

Denying the fulfillment of this wish (i.e. averting or subverting the trope) can result in What Measure Is a Non-Badass? occurring.

Again, please remember that neither Wish-Fulfillment nor the fulfillment of any specific wish (including this one) is a bad thing. If reality matched our fantasies, we would not need to create fiction.

Examples of a character with this trait, or of the work playing with this expectation of the audience: