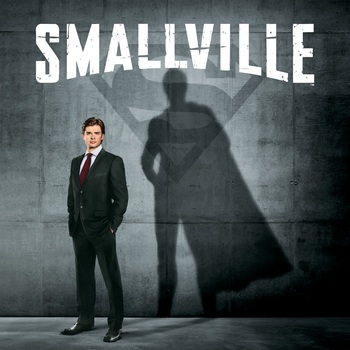 "I stand for truth, justice, and... other stuff."
Advertisement:

By 2001, the DC Comics Superman franchise was moving along steadily with the animated exploits of Justice League. However, the TV side had remained in limbo since Lois & Clark ended four years prior, and it would be another five years before Supes returned to the big screen. Thusly, and perhaps not so coincidentally, when the flagship show of The WB left for its competitor (and future partner in The CW), it was decided to offer Smallville as a newish take on the Man of Steel, specifically chronicling Clark Kent's adolescence as he comes into his powers and eventually his taking on The Cape. Created by Alfred Gough and Miles Millar alongside Tollin/Robbins Productions (best known for shows such as All That and One Tree Hill), the series premiered on October 16, 2001.

The first four seasons are a Superhero Origin of sorts, being a Teen Drama that focuses largely on Clark Kent (Tom Welling)'s life in the titular Smallville, the town where he grew up after crash landing on Earth. Growing up under his Muggle Foster Parents, Jonathan (John Schneider) and Martha Kent (Annette O'Toole), Clark is friends with Lana Lang (Kristin Kreuk), his next-door neighbor, Pete Ross (Sam Jones III), the first person to know his secret outside his parents, and Chloe Sullivan (Allison Mack), an aspiring journalist involved in a Love Triangle between herself, Clark, and Lana. Clark also befriends Lex Luthor (Michael Rosenbaum), the son of billionaire Lionel Luthor (John Glover), while his love for Lana is complicated by her boyfriend and high school jock Whitney Fordman (Eric Johnson). The fourth season introduces Jason Teague (Jensen Ackles), who meets Lana while she is in Paris and follows her home, and Lois Lane (Erica Durance), Chloe's cousin who takes her cue to join the Daily Planet and, in an obvious Foregone Conclusion, becomes Clark's Second Love after Lana chooses to leave him.

Once the main characters graduate from high school, the series focuses less and less on Smallville and more on Metropolis, where Clark eventually moves to. The sixth season sees the debut of Jimmy Olsen (Aaron Ashmore), a photographer for the Daily Planet who rekindles his relationship with Chloe, his ex-girlfriend, and competes for her attention with Davis Bloome (Sam Witwer), a paramedic from Metropolis General Hospital. It also properly introduces the Justice League, led by Oliver Queen (Justin Hartley), a billionaire from Star City intending to bring justice to people who are outside the law. Clark's long-lost cousin, Kara (Laura Vandervoort), appears in the seventh season, being used by Lex to find out about Clark's secret. Clark joins the Daily Planet in the eighth season, which also introduces Tess Mercer (Cassidy Freeman), Lex's successor as CEO of LuthorCorp following his disappearance. The penultimate season has Clark facing an army of cloned Kryptonians led by Major Zod (Callum Blue), who wants to turn Earth into a new Krypton.

The series initially took a Monster of the Week approach to most episodes, introducing "meteor freaks" who gain various powers thanks to exposure to Kryptonite deposited in Smallville during the meteor shower which heralded Clark's arrival. As the years went by, a more diverse array of adversaries were gradually introduced (including many of Superman's Rogues Gallery), and the Teen Drama elements fell away in favor of a somewhat darker tone, and a much deeper connection to DC Comics lore. In a nutshell, the first half of the series dealt strictly with Clark figuring out who he was, while the second half was more about Clark finding his place in the larger DC Universe, frequently butting heads with figures such as Green Arrow, the Justice League, the Justice Society, the Legion of Super-Heroes, and even the New Gods. By the eighth season, Smallville (the town) barely appears, so the series could have been renamed Metropolis for its final stretch.

Whereas Lois & Clark shifted gears toward a Post-Crisis vision of Superman, Jeph Loeb led the way in bringing many Silver Age ideas back into prominence on Smallville. Most notable among these is the origin tale of Clark and Lex knowing each other in high school, and Lois being introduced to Clark long before their partnership at the Daily Planet.note Interestingly enough, one 1940's comic featured a young Clark/Superboy winning a high school journalism contest, with the prize being a day as a cub reporter on the Daily Planet. Guess who the other winner was?

The series is notable for its extreme adherence to Comic-Book Movies Don't Use Codenames when it comes to Clark; the name "Superman" was only said once, in the pilot episode. Showrunners Gough and Millar consciously developed the series to include a "no tights, no flights" rule, preferring a down-to-earth depiction of Clark Kent instead of his Superman identity. This results in Clark not adopting his superhero persona until the Grand Finale, including the suit that comes along with it, and the absence of Clark's traditional flight ability. It also liberally uses Long-Runner Cast Turnover; by the final season, Clark and Chloe are the only cast members from the first season remaining.

Smallville managed to survive for a decade, arguably note Stargate SG-1, while three episodes shorter, has two additional Made-for-TV Movies and is undeniably straight sci-fi, while Smallville has explicit magic in the form of Zatanna beating Stargate SG-1's record as the longest running American Sci-Fi show (Power Rangers doesn't count, because it uses Japanese-made footage. Technically, Red vs. Blue is the longest running American sci-fi show, from 2003-2019, though episode length is only 3-15 minutes). The show concluded on May 13, 2011 after ten years and 217 episodes, becoming DC's longest-running live-action series. It was also the longest-running WB/CW series until Supernatural beat its record on May 20, 2015.

In 2005, Gough and Millar developed a potential pilot for a series based on Aquaman. It was not considered a spin-off to Smallville and, instead of Alan Ritchson, who portrayed the character on the show, Justin Hartley was chosen. Nevertheless, it was planned to air on The WB, with crossovers with Smallville being considered. Because of the executive hurdles surrounding the merger of The WB and UPN, the pilot was not picked to series. Hartley would instead star as the Green Arrow, who debuted on Smallville the same year Aquaman was supposed to premiere.

In October 2012, Greg Berlanti brought DC back to The CW with a new take on the Green Arrow, with the series Arrow. The show would become the foundation for what would become known as the Arrowverse, which eventually featured its own Superman played by Tyler Hoechlin. In 2019, as a way to acknowledge its role as the Arrowverse's predecessor, Tom Welling and Erica Durance reprised their roles for the epic adaptation of the original Crisis Crossover, Crisis on Infinite Earths; during which it was revealed that, per the Arrowverse's in-show Multiverse, the Smallville Earth is designated Earth-167, a reference to Alfred Gough and Miles Millar's birth year of 1967.

Compare with Gotham, a show with a similar prequel premise for Batman.

On a hot day, Clark goes to the lake for a swim. Just as he's undressing, he finds Lana has shown up, and offers to join him.

On a hot day, Clark goes to the lake for a swim. Just as he's undressing, he finds Lana has shown up, and offers to join him.