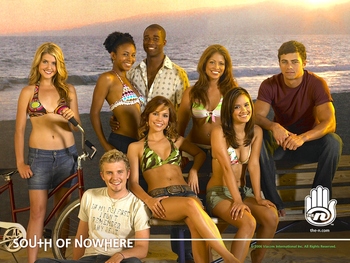 I-I-I don't wanna know if you don't want me, no...
Advertisement:

South of Nowhere (2005-2008) is an award-winning teen-oriented TV series about a family who moves from Ohio to Los Angeles. It is the first such show conceived with a lesbian character at the outset. The show was produced and aired by The N, a teen-targeted programming block that aired nightly on the Noggin channel.

The story revolves around the Carlin family, who move to LA when mother Paula (Maeve Quinlan) is transferred to a hospital there. While there, father Arthur (Rob Moran) specializes in relationship counseling, and the three kids complete their high school education.

At school, oldest natural child Glenn (Chris Hunter) endeavors to make the pro-basketball circuit, which brings him to rivalry with Aiden Dennison (Matt Cohen). Meanwhile the younger natural Carlin, Spencer (Gabrielle Christian) is questioning whether or not she should pursue a relationship with Aiden's ex-girlfriend, Ashley Davies (Mandy Musgrave). And while that is happening, the Carlins' adopted son Clay (Danso Gordon) is finding out what it means to be black in a mostly-white world. Meanwhile, Aiden's other ex, Madison Duarte (Valery Ortiz), moves onto Glen when Aiden starts showing interest in Spencer.

Season 1 ends with Glen messing up his knee on a pick-up game and Paula almost buckling under the strain her job put on her marriage, while Spencer and Ashley finally hook up.

Season 2 opens on the morning after. The season introduces Kyla Woods (Eileen April Boylan), Ashley's half-sister, who moves in with her after the death of their father (played by CC DeVille from Poison). Kyla ends up hooking up with Aiden. Meanwhile, Spencer comes out, Glen becomes addicted to painkillers and Clay faces the ultimate test when his girlfriend, Chelsea Lewis (Aasha Davis), announces that she is pregnant to him. Clay dies during a drive-by shooting on Prom Night.

Season 3, the final season opens three months later, with Spencer and Glen starting a new school year. Ashley and Kyla's inheritance comes through, and they decide to get their GEDs and move out on their own. Spencer breaks up with Ashley and enters into a rebound relationship with Carmen (Brooke Vallone), a rebellious artist-type who later moves in with Ashley and Kyla. Chelsea loses the baby in a car crash. Meanwhile, Paula struggles to come to terms with Spencer's orientation.

Sadly, the series was canceled after three seasons. The last half of Season 3 took several months to air in the US—at which point it had already been properly aired in France.

Seasons 2 and 3 were accompanied by a series of webisodes serving as short character vignettes. The final webisode acts as a Distant Finale to the show taking place five years later.