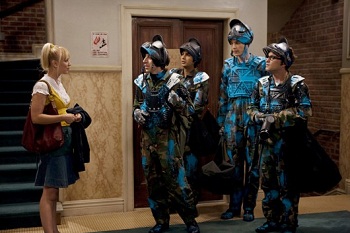 They play; it doesn't mean they're good at it.
"I can't shoot my own mother. Not with paint, anyway."
— Daria
Advertisement:

One difficulty for training soldiers is to try recreating the conditions of a battlefield, because you don't want people to go into shock once they hear things whizzing past their head. You also don't want to be using live ammo to get them used to that sensation. So playing paintball is one of the few ways to recreate a battlefield scenario without all the messy carnage involved.

In fiction this scenario is often used for those same purposes, creating a battlefield situation without the genuine worry of a character being killed. There are many different stories this situation can create:

As with many things, those who are familiar with the game will likely be frustrated by the inaccuracies done, sometimes just in the name of Rule of Cool. Among these include:

Mistakes are more excusable when it's not a regulation game (i.e. a bunch of dudes just throwing everything together for shits and giggles). While not as widely known in fiction much of the same format can be applied to airsoft, which is the use of small plastic BB's as ammo with both gun and ammunition being generally cheaper for an avid player. In even more extreme cases, typically played for laughs entirely, laser tag may also be used for the same purpose.

This is Truth in Television, as military and law enforcement use special "Simunition" rounds for training that are fired from an actual gun, while still being relatively safe to use. A number of paintball guns are designed to look, feel and have the same heft as a regular firearm. In any case, skills and tactics used in paintball (regardless of equipment including the gun and headgear) translate rather well to an actual combat engagement.