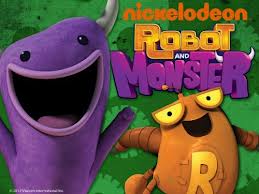 Robot and Monster is an animated series from Nickelodeon created by Dave Pressler, Joshua Sternin and Jennifer Ventimilia. It chronicles the misadventures of two best friends, Robot Default (Curtis Armstrong) and Monster Krumholtz (Harland Williams), who live together and work in the Blinking Lights Factory. They live in a world where Robotic Mechanicals and Monstrous Organics are unified by their shared love of bacon.

Robot is an inventor whose experiments usually fail, often explosively. He is often short-tempered, partly because his experiments often fail and partly because his family, who run the Blinking Lights Factory, find him to be a complete disappointment. Monster, on the other hand, is an eternal optimist who always looks at the brighter side of things and is the self-proclaimed "Happiest Guy in the World." The humor often comes from the duo tackling a problem with their distinct personalities.

The show had little network support. New episodes premiered Out of Order before the main network dropped the series in January 2013, leaving 3 regular episodes and a half-hour special unaired. From December 2013 to February 2015, three out of four episodes were slowly burned off on the Nicktoons channel, though its season 1 finale "Monster Hit" somehow aired out-of-order as well.

In essence, Robot and Monster was essentially as a warmup act for Teenage Mutant Ninja Turtles (2012), which was created by the same people and premiered in the same year. That being said, Robot and Monster wasn't a bad show, it simply couldn't find the right audience at the time, even without the network's antics. At the very least, it was one of the only Nicktoons to receive a 4/5 rating by Common Sense Media.

The complete series, including a few unaired episodes, was released on DVD in 2014.

Now has a work-in-progress recap page.

How to Do Everything! with Garrick & Marvin is another series created by Dave Pressler that premiered a month after Monster Hit aired.