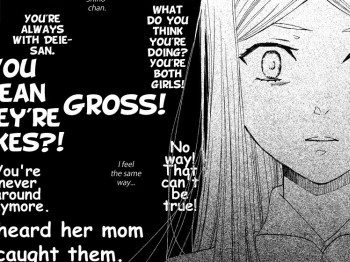 Shin Kuroi: ...I have always loved you. Maybe, ever since we were little. I've been hanging onto yearning and liking for you.
Hiroyuki Nishimura: Wha...
Shin: Holding those kinds of feelings for someone of the same sex one-sidedly is disgusting, isn't it.
— Morenatsu
Advertisement:

Despite the older meaning of the word "gay," gay characters in fiction tend to be a miserable lot, and not by simple coincidence — their misery can be attributed largely to their sexuality or, more accurately, other people's attitudes towards it. In short, they don't just have angst, they have gayngst.

Characters suffering from gayngst are prone to alcoholism and other forms of substance abuse, self-loathing, Self-Harm, rampant homophobia towards themselves and others, rejection by homophobic family members, falling in tragic unrequited love with heterosexuals, contemplating (and often committing) suicide, and wishing that they were straight.

Gayngst is a Pet-Peeve Trope of many because while it usually portrays gay people sympathetically and addresses an issue many gay people in Real Life go through, it can be interpreted as saying that it's impossible to be gay without being miserable, or that gay people don't deserve Happy Endings, or at its very worst and most ineptly-handled, gay relationships are innately disastrous. However, gayngst is still unfortunately common in real life. After all, True Art Is Angsty transcends sexual orientation; a real-life term for this would be Internalised Homophobia.

If the story wants an uplifting tone, the character will eventually come to terms with their sexuality, have the obligatory Coming-Out Story, and either live Happily Ever After with their love interest or morph into some other gay archetype (usually Straight Gay or Lipstick Lesbian; either this is their natural personality or they still have some lingering insecurity).

Gayngst is often found in the Yaoi and Yuri Genre works for obvious reasons. Doesn't come up quite as often in works with a Cast Full of Gay — even if a couple of characters are of the angsty persuasion, they're usually balanced out by the rest of the cast in such a way that the Unfortunate Implications are done away with.

Not to be confused with the Gayngster, although some gayngsters probably have their share of gayngst. Clumsy examples of gayngst often dive headfirst into Wangst territory. Sister Trope of Bury Your Gays, which it frequently overlaps with, as well as Trans Tribulations and Trans Relationship Troubles, Intersex Tribulations, Bi-Wildered, and Wanted a Gender-Conforming Child. Sometimes the result of Forced Out of the Closet, or Cure Your Gays. Depending on how they're played, it can be a Sub-Trope of Bullied into Depression, Why Couldn't You Be Different?, Internalized Categorism, Boomerang Bigot, and You Are What You Hate, and a Super-Trope of Incompatible Orientation, Armoured Closet Gay, Out of the Closet, Into the Fire, Homophobic Hate Crime, and Gayngst-Induced Suicide. Opposite of Queer People Are Funny.