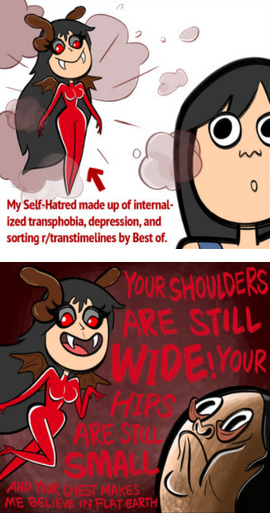 Dysphoria is a devil of a problem.
"I feel... in-between. I don't feel like a girl or what everyone thinks is a girl, I don't like make-up and stuff like you do, I really, really hate my boobs... but I don't feel like a boy either."
— Yael Baron, genderqueer character, Degrassi: Next Class
Advertisement:

Transgender (or trans) and non-binary people face a lot of challenges in life. While a minority of the world is starting to understand and tolerate people with sexual/romantic leanings towards people of their own gender, many still scratch their heads at someone who doesn't identify with the gender they were assigned at birth. As a result, trans/non-binary characters in fiction tend to be miserable due to dealing with their own gender dysphoria and/or other people's misconceptions.

Common themes include being forcibly outed to disastrous consequences, being referred to as the wrong pronoun (sometimes deliberately), having parents who Wanted a Gender-Conforming Child, being Mistaken for Gay (though some trans individuals certainly are gay, most people tend to think heterosexual trans individuals are confused gay people) or a crossdresser, and more often than not, Self-Harm, dying of suicide or being murdered due to being trans. And on the opposite side of the spectrum, there are people who really like trans people, but sexualize them to the point of dehumanization.

Unfortunately, this is Truth in Television; however starting from the end of the Turn of the Millennium to The New '20s, there have been slightly better attempts to deliver more uplifting narratives and more fully actualized characters.

Trans Relationship Troubles is a sub-trope revolving around transgender characters having difficulty dating. See Gayngst and Bi-Wildered for the equivalent of this trope as applied to sexuality rather than gender, Intersex Tribulations for an intersex equivalent, and Gender Bender Angst for Gender Bender-related dysphoria. Often related to Forced Out of the Closet. Super-Trope of Out of the Closet, Into the Fire. Contrast Easy Sex Change, which is short on tribulations.