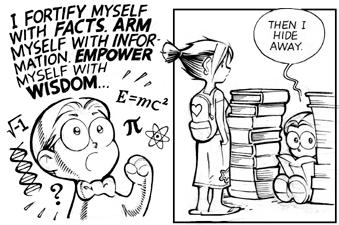 A cute and brainy bibliophile, this trope embodies the cute, shy, and vulnerable archetype as applied to a nerdy girl. She wanders around with her head in a book and is ready to spout out facts at the drop of a hat. There's a tendency for her to be shy, young, quiet, and socially awkward. Occasionally this is highlighted by having her wear glasses, or have her bangs in her face to hide her eyes. She'll almost always be more conservatively dressed than most of the cast.

This trope tends to be female, but there are male examples, though they tend to be younger males, especially Adorably Precocious Children, or at least look like it. With regards to occupation, they might be a scientist, a librarian, a schoolgirl, a wizard, or something similar in nature.