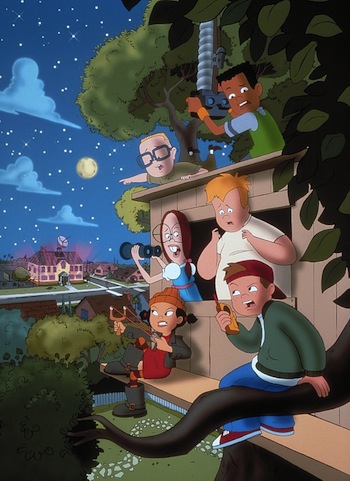 Recess is an American animated television series that was created by Paul Germain and Joe Ansolabehere (who worked on Rugrats until the show was originally supposed to end in 1994), and produced by Walt Disney Television Animation. It ran from September 13, 1997, to November 5, 2001, simultaneously on ABC (Saturday mornings) and UPN (Sunday mornings and weekday afternoons, beginning in 1999). The series focuses on six elementary school students and their interaction with their schoolmates and teachers. In many respects, it serves as an animated knock-off of prisoner-of-war movies such as The Great Escape... combined with a generally positive depiction of the elementary school experience.

Many plots would deal with the kids' Serious Business attitude about simple grade school life, mostly, among other aspects, recess. This includes having a designated 'King'. Nicknames for each other based on their main 'quality' (Swinger Girl, The Diggers, Pale Kids etc.) And the concept of popular fads quickly taking over playground demographics. The series was also well known for its large Periphery Demographic, due to every episode having at least one Parental Bonus.

The series was notably the only show to premiere in the initial season of Disney's One Saturday Morning that would last the entirety of the block's run, going on well into the first two years of ABC Kids (The New Adventures of Winnie the Pooh doesn't count, as it originally ran on ABC from 1988 to 91; they put in on to fulfill ABC stations' E/I quotas). It was also rerun the most out of all the shows on One Saturday Morning, pretty much being on all of Disney Channel's affiliates at one point or another. It was one of the few older shows to air on Disney XD after Toon Disney shut down.

In 2001, Recess: School's Out was released in theaters to positive reception. Please put all tropes relating to the movie there. In 2003, the film (and the show itself) was followed up with a Direct to Video sequel and finale, Recess: Taking the Fifth Grade. The main six characters (and Miss Finster) themselves last appeared in a 2006 crossover episode of Lilo & Stitch: The Series. There was also Recess: All Growed Down (2003), which, despite consisting of three previous episodes, one new episode, and framing material, is still considered a "movie" by Disney. The series and movies are currently available to stream on Disney+.