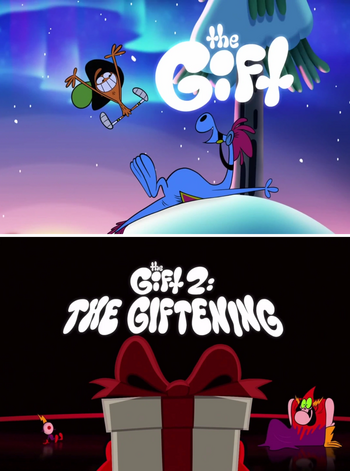 To qualify, it's not enough to simply have an object, setting, or character from one episode appear in another, otherwise any series with a Rogues Gallery would consist almost entirely of Sequel Episode. If Cop Show has the Main Characters arrest a thief and recover some stolen jewels in one episode, and a later episode has the thief break out of prison and cause some more havoc, that's just a One-Shot Character moving up to Recurring Character status. If, on the other hand, a later episode has the cops discover that the stolen jewels they recovered were actually fakes, and they have to interrogate the thief to find out where she hid the real jewels, that is a Sequel Episode; the plot resolved in an earlier episode is reopened and explored again in a new episode.

Obviously this only applies to series where standalone episodes occur somewhat regularly. If the whole show is one long Story Arc, there's not enough separating the plot of one episode from another to make labelling it a "sequel" meaningful. However, if a series has multiple story arcs, it is possible for a later Story Arc to be a sequel to an earlier one. A show with half arc seasons can also have these based on the stand-alones.note Though if the sequel to a standalone starts off a story arc, that stand-alone could be an Innocuously Important Episode. Compare Myth Arc, which can be seen as a series of these in an otherwise episodic show.