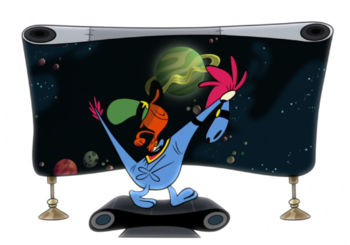 Animated characters running, driving or in a chase scene will pass the same two bushes, three rocks and four trees over and over again. It is, or was, a cost-cutting measure — the eternally-looping background saves a lot of time and effort on the part of the animators, no matter where the characters are going and how they're supposed to get there. It occasionally results in Special Effect Failure if the cut between the end of the loop and the beginning isn't as smooth as it should be. In the industry, this is known as a "repeat pan".

Wrapping backdrops are not limited to outside settings either. Tom and Jerry can chase each other past the exact same door and window five times in a small room with no corner in sight.

The effect was most frequently seen in products made by Hanna-Barbera, but can be spotted in shows from other studios, too.

This trope was lampshaded even before it saw widespread uses, with some older Looney Tunes having the camera zoom out for us to see the characters running on a treadmill powering the background, before the characters themselves notice and jump off the treadmill to continue the chase properly.

It's rarely found in anime, where the tendency is to avoid long running sequences to begin with, or to instead use an abstract background when doing so (speed lines, pastel versions of cityscapes, and other easy-to-draw things) in order to cut costs.

Today, largely a Discredited Trope. Compare Cut and Paste Environments for video games, and Unnaturally Looping Location, for locations looping in-universe. Modern-day cases can be found in video games involving scenarios where the background is always moving—the development team must use this trope so the scenario can play out as long as needed for the player to resolve it.

Not to be confused with Wrap Around.

Frank and Len admire the repeating scenery outside the train.

Frank and Len admire the repeating scenery outside the train.