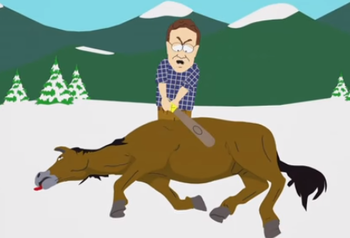 Nobody told him visual puns aren't funny anymore.
"For years there have been reports of the death of the Western. Now comes American Outlaws, proof that even the B Western is dead. It only wants to be a bad movie, and fails."
— Roger Ebert
Advertisement:

A trope which has gone way beyond being a Discredited Trope to where the very act of Playing With that trope has itself become a trope.

The progression is generally:

→ Then, if the downward slide continues, it may end up as a Forgotten Trope.

Named for the idiom "beating a dead horse", which describes continuing a course of action that is clearly pointless. If you're whipping your horse to gain speed when the horse is dead, you're just wasting your time. Try as you might, that horse isn't going to move any faster for you... or for anyone else.

Naturally, the Dead Horse Tropes tend to be The Oldest Ones in the Book, too.

If a Dead Horse Trope is still used straight in recent works despite seemingly being used/abused to death, it's an Undead Horse Trope. If it was never really played straight in the first place (but everyone assumes it was), it's a Dead Unicorn Trope. If it's so natural to the medium of storytelling that it can still be played straight no matter how often it's used and abused, it's an Omnipresent Trope. If the trope not only makes viewers/readers groan but also makes them angry, you've probably got a Pet-Peeve Trope.

A common cause of "Seinfeld" Is Unfunny, because it's hard to put yourself back in the frame of mind you had when this was new. A related trope is Condemned by History, where something that was popular in its day is rejected in later years and becomes known primarily for the backlash against it.

Please put any examples on the trope pages, as it gets in the way of indexing.