Chained to a Railway 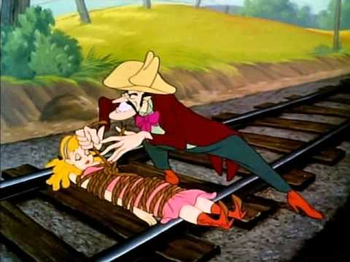 "I'm afraid she's a little tied up at the moment, but don't fret — I have a feeling we'll be running into her shortly."
— Khallos, TimeSplitters Future Perfect, milking the pun and the situation for all they're worth.
Advertisement:

The music is high-tempo, the damsel is in distress, and the mustachioed villain is mugging to the camera. Yup, she's been chained to a railroad track, and the 7:10 Express is running right on time.

Despite popular opinion, there are hardly any silent films in which you'll see this exact scenario. And in the ones where it does happen, it's usually played for laughs, making fun of the already well-known trope from the world of theater. When this trope did appear in silent cinema, it was usually Played With in various ways, and had more variation to it than modern homages would have you believe. Nevertheless, parodies are often done in a Retraux style that imitates old silent movies.

although a more rudimentary form of it was seen on stage in 1863 in the play The Engineer. However, it really entered the meme pool as a result of its inclusion in the 1867 play Under the Gaslight

◊, by Augustin Daly. (Interestingly, in Gaslight the victim is a male, not a fair maiden - and is in fact rescued by the fair maiden.) By 1868, it reportedly could be found in five different London plays all running at the same time, and remained a theatre staple for decades. Variations of this trope was used in the films The Train Wreckers (1905) and Buster in Nodland (1912) before appearing in its most iconic form in the 1913 Keystone Komedy film Barney Oldfield's Race For A Life, where it was already Played for Laughs. It's commonly associated with the 1914 film serial The Perils of Pauline, but this is probably due to confusion (no one knows for sure, since neither the full serial nor the script have survived).

If a Dastardly Whiplash character appears, he'll probably use this trope without shame, befitting of a similarly "outdated" villain. Heck, he'll be proud to show off his knowledge of "the classics."

As bizarre (and horrible) as it may seem, this trope is Truth in Television. At least six people in the United States were killed between 1874 and 1910 as a result of being tied to railroad tracks. Of course, it was never as common in real life as in fiction, no doubt because there are more efficient ways of murdering people.

Usually, the trains used in this trope would be powered by old-time steam engines, but a few modern uses/parodies would use diesel locomotives instead. It's also a hazard for characters in a Mouse World, who have enough difficulty with toy trains, let alone real ones.

For more information, see this page

If the hero can't reach the maiden, he may have to engage in some Trainstopping. See Chained to a Rock, which is much, much older, but operates on the same basic principle. Compare Railroad Tracks of Doom.