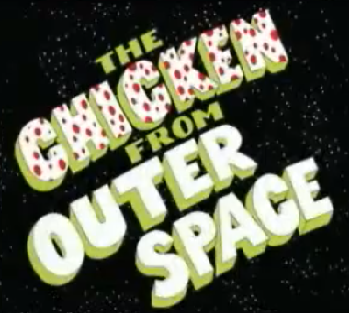 "This shouldn't happen to a dog."
— Courage
Advertisement:

The Chicken from Outer Space was an 11-minute cartoon created by John R. Dilworth for What A Cartoon. Released on December 31, 1995, the short eventually got nominated for an Academy Award for Best Animated Short Film (losing to A Close Shave). It later served as the pilot for the Cartoon Network series Courage the Cowardly Dog.

Enjoying a nice and peaceful day in the middle of Nowhere, Kansas, Courage is scared out of the house by Eustace and, shortly after, sees a UFO land in the front yard. Horrified, Courage gets his masters, but when they arrive at the scene, the space craft had gone, as well as its captain, a red eyed chicken.

Throughout the course of Courage, two sequel episodes were made. In one, the chicken returns as a headless, fried chicken, and in the other, the chicken’s three-headed son comes down to Earth to finish the job.

This short provides examples of the following tropes:

The Chicken from Outer Space

This shouldn't happen to a dog, indeed...

Example of:
Iris Out

The Chicken from Outer Space

This shouldn't happen to a dog, indeed...