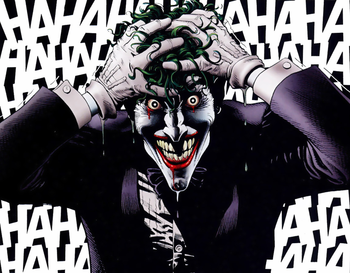 "I used to think that my life was a tragedy. But now I realize, it's a fucking comedy."
"Laughter is a good medicine but if you laugh for no reason you need medicine"
— rose mary, Higurashi Laugh Collection

Trauma and tragedy tend to follow characters like plagues, and they often break them down, turning them into insane, jaded shadows of their former selves. This can often happen in various ways, but the best way to tell if a character just can't take it anymore is if they break down and start laughing for no reason at all, or for all the wrong reasons. When this happens, they will usually just continue sitting there and laughing uncontrollably, as if in a trance, until someone breaks them out of it, often by a slap in the face.

Expect the laughing character to either gain control of themselves and apologize for losing it (while still emotionally fragile, of course), or, alternatively, simply stop caring about life. This may lead to them becoming distant, or become more harsh than before.

On the flip side, villains are also prone to this. It is often shown as being fundamentally different from an Evil Laugh, usually as them either laughing a lot longer than normal, having the laugh sound more deranged than cold and boastful, or a combination of the two. This is normally used if the writer wants to characterize the villain in a much more psychotic light and have a more frightening nature than normal. Expect it to also be used for a Villainous Breakdown in some cases.

Like Insane Equals Violent, this phenomenon is rare in real-life instances of severe mental illness. In fact, a common characteristic of schizophrenia is the absence of laughter, or indeed of other indicators of emotion ("flatness of affect"). Of course, the Truth in Television here might come from Bipolar Disorder, where mania causes inappropriate laughter on a euphoric scale — or Schizoaffective Disorder, which is the two in a blender. Then there's the simple fact that inappropriate laughter can accompany intense grief, anger or other forms of distress, without actual mental illness needing to be involved — a related phenomenon is "hysterical laughter", where an intense bout of Inelegant Blubbering starts to resemble a laughing fit. Yet another related if rare phenomenon is Pseudobulbar Affect, which can cause laughter or sobbing at inappropriate times usually in response to stress — like Tourette's syndrome, this is not something the person can control; unlike Tourette's, it usually is the result of severe head trauma and not mental illness.

Not necessarily related to Evil Laugh, but definitely a type of Freak Out. Also see Put the "Laughter" in "Slaughter" for maniacs who engage in this regularly, and Giggling Villain for a constant if contained laugh. Sometimes overlaps into Die Laughing, especially if it is the result of a Villainous Breakdown. May be the cause of Ominous Adversarial Amusement. Compare Corpsing, involving laughter at inappropriate times (probably because repressing is maddening). Contrast Mirthless Laughter, which similarly involves someone bursting into laughter at an inappropriate/stressful situation but without the extreme of being driven insane.

Gumball's instructions accidentally send Penny into the ''desert place'' instead of the dessert place in Elmore, where they both shared their first ice cream. He even left her a message in the desert, made out of bones, apologizing he send her out there and lampshading how easily he could've corrected the original message in the first place. This makes Penny laugh maniacally for a moment while turning into a gorgon.

Gumball's instructions accidentally send Penny into the ''desert place'' instead of the dessert place in Elmore, where they both shared their first ice cream. He even left her a message in the desert, made out of bones, apologizing he send her out there and lampshading how easily he could've corrected the original message in the first place. This makes Penny laugh maniacally for a moment while turning into a gorgon.