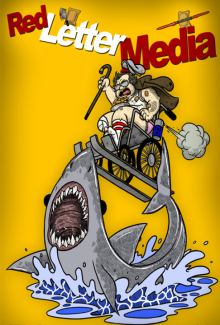 "Oh no! Half in the Bag has jumped the shark! It's never been the same since episode four!"
Nadine: Mister, please, just let me go! I promise won't say anything! I'll do anything, just let me go!
Mr. Plinkett: Quiet! I'm making my YouTube Star Wars review!
Advertisement:

RedLetterMedia is a film and video production company with a channel

that produces a number of films and short videos. The company was founded by Mike Stoklasa in Arizona, but it later moved to Milwaukee, WI. It began as a creator of zero-budget horror films and has gradually shifted to producing humorous film and pop culture reviews online.

In addition to its web content, the production company also makes feature-length, relatively No Budget films, most of them comedic.

Their discussion thread is here

Supporting member Jack Packard was signed by The Escapist to cover videogames in mid-2019, and has since launched a new gaming-centered show called Underdeveloped, as well as Let's Play videos with Yahtzee Croshaw.

Examples given by their other works: