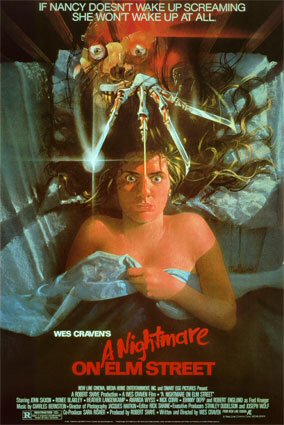 A Nightmare on Elm Street is a 1984 horror film by Wes Craven.

Teens living in Springwood, Ohio are having nightmares about a burned man with blades on his fingers. After one of her friends dies during a nightmare like that, it's up to Nancy (Heather Langenkamp) to find out what's going on, and ultimately to confront it before she dies too.

The film was successful upon release; it saved New Line Cinema, then a struggling a foreign/indie film distributor, from bankruptcy and introduced the world to the dream-stalking Freddy Krueger, who would return many times since.

The car honks its horn as it pulls up in front of Nancy's house.

The car honks its horn as it pulls up in front of Nancy's house.