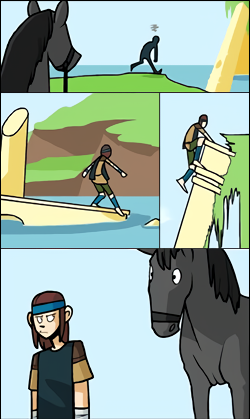 Kuzco: NO! It can't be! How did you get back here before us?!
Yzma: [opens mouth to speak, then stops] ...How did we, Kronk?
Kronk: Well, ya got me. [pulls down the map from the previous travel montage] By all accounts, it doesn't make sense.
— The Emperor's New Groove
Advertisement:

A character who goes offscreen for even a second can instantly appear anywhere else, usually as long as the camera shot doesn't include them or they're obscured by something in the scenery from a certain camera angle. Nevertheless, extreme cases will be able to switch position even when all that's happened is that the camera changed shots and we're looking at the same scene from a new angle, like a deliberate technical goof. No matter how impossible it is for them to go from Point A to Point B in the time given, much less doing so without crossing the camera's field of view or making a sound, they will get there. It's almost as if everyone in fiction has the power of Teleportation, as long as they only use it when the audience isn't looking.

Variations of Offscreen Teleportation exist, for instance the telescope version. In this, Character A actually sees Character B a good distance away (usually involving looking through binoculars or a telescope), then looks away or loses sight of him. When Character A looks back a second later, Character B is right in front of him. Another variation is when Character A is running away from Character B, who makes almost no onscreen effort to chase him. Character A travels a conspicuously long route to a hiding place or equivalent, only to find or even collide with Character B when he gets there. "Sneaky" doesn't explain the speed he'd have to move at.

Even if his victim (usually it's a good guy running from a baddie) just ran five miles to get away from him and up two flights of stairs to hide in a closet with one entrance; when he flicks on the light, the other guy will be right behind him, without a sign of sweat or fatigue.

Though possible in a multitude of genres, Horror movies are particularly prone to playing this one straight - the killer will know exactly where his victim is running to and be waiting for him before he even gets there, obviously because it lends itself so well to alarming the audience. This is especially common when the victim was Exploring the Evil Lair. This is one of those powers that the horror villain loses as he goes through victims and starts to approach the final characters. Perhaps he's losing his Scourge Of God advantage? It's all covered by the Rule of Scary. For further examples done in the name of horror, see also Flash Step, Villain Teleportation and Mobile Menace. Compare Already Undone for You. Outside of horror, this trope is really popular with characters who are supposed to be mysterious (such as fortune tellers, ninjas, wise old people and Batman), because it gets them away quickly before the person they were talking to has a chance to ask too many questions.

It doesn't have to be a character consciously doing this for it to count as Offscreen Teleportation. Sometimes the scenery conspires to do this to characters who couldn't do it ordinarily. For instance, if Character C falls into Hazardous Water close to the shore, he may thrash about underwater for a few seconds and then find when he surfaces that he got teleported farther away from the shore than could reasonably be done even by a strong current.

This sometimes happens in video games, at least inadvertently, and can sometimes fall into Acceptable Breaks from Reality. (But that doesn't make it any less creepy!) In order to keep allies from getting stuck in objects (which happens...sadly.) the game may simply teleport them behind you if they are off-screen.

Typically abused by characters in a The Cat Came Back gag. See Stealth Hi/Bye for when people just use this power to begin or end conversations. See Yuppie Couple for the innocuous background-character version. Offscreen Reality Warp is a related trope where any temporary cut away from a character, no matter how brief, results in changes so quick as to be improbable at best and reality-warping at worst, such as an Instant Costume Change. Scooby-Dooby Doors uses a very specific version of this trope.

Compare Travelling at the Speed of Plot, a usually less blatant situation in which characters make it to a location much faster or slower than expected. See also Fakeout Escape (characters usually always find time to hide and tend to do it offscreen). Contrast He Was Right There All Along.