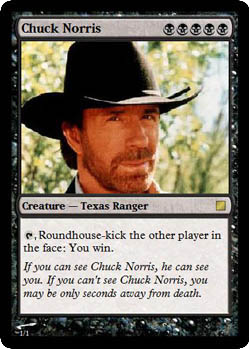 Chuck Norris has power and toughness, but nobody was brave enough to ask for specifics.
"Death had to take him in his sleep, for if he was awake there'd have been a fight."
— Thomas R. Marshall on learning of the death of Theodore Roosevelt
Advertisement:

A specific form of Memetic Mutation when the fandom of a series exaggerates a character's capabilities and combat skills to preposterously epic god-like levels. Despite the name, it doesn't necessarily have to be a widely known Internet meme, and is sometimes just an in-joke among the fan-base. In some cases, the writers agree.

While Memetic Badasses can come in all shapes and sizes, there are two recurring flavors:

Often overlaps with Fan Wank. Fear too the Memetic Psychopath, and especially the Memetic Molester.

In-universe, this can be the result of being Shrouded in Myth, or a God-Mode Sue if done poorly.

Upgrading the badassery significantly with a character from a previous work is an Adaptational Badass. When done to a historical character, it's a Historical Badass Upgrade.