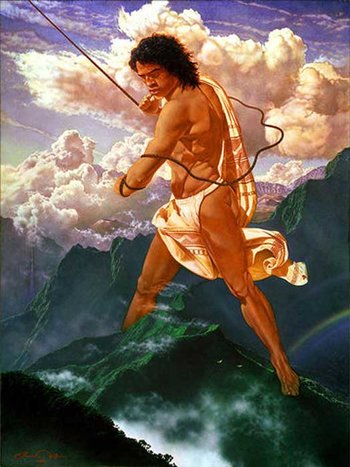 Maui, a Polynesian demigod and hero, creating all the islands.
Advertisement:

The mythology and deities of the Pacific region are both complex and diverse. They have been developed over many centuries on each of the islands and atolls that make up Oceania. There are some deities which are shared between many groups of islands—particularly among the islands of the Polynesian-speaking peoples—while others are specific to one set of islands or even to a single island. Their exact roles are often overlapping as one divinity can appear in different places under different names, and a single divinity can also appear in many different forms.

Works based on (or including elements of) Pacific mythology: