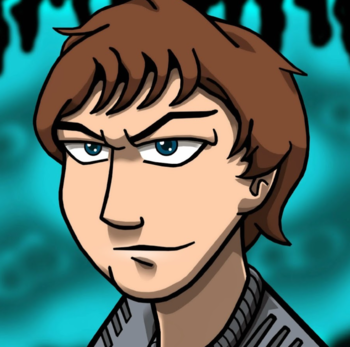 "Alright, it's time for the giant flying turtle to face off against the rainbow death lizard to find out once and for all who's more ridiculous!"
Advertisement:

Brandon's Cult Movie Reviews, hosted by Brandon Tenold, is a Web Video review series focusing on cult cinema, including low-budget sci-fi, dinosaurs, foreign knock-offs and the films of Caroline Munro. Many of the episodes were originally produced in 2011-2014 but were pulled down from YouTube due to copyright issues. The show returned with new episodes soon after and was picked up by Channel Awesome, before leaving that platform in a mass exodus in 2018.

Oh no! Tropes! My one weakness!