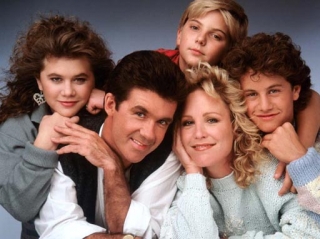 Alan Thicke and Joanna Kerns are Jason and Maggie Seaver, a Happily Married couple living on Long Island with their three children: mischievous teenager Mike, brainy Carol, and precocious Ben. Maggie has decided to return to her pre-motherhood career as a journalist, and Jason has moved his psychiatric practice into the family home.

Early focus on the parents shifted quickly as Kirk Cameron's Mike became the face of the series.

Behind-the-scenes turmoil shaped the series' later years. In early seasons, Mike and Ben had often teased Carol for being overweight, which was cited as a factor when Carol's portrayer, Tracey Gold, left the show to get treatment for anorexia. Another source of controversy emerged when Kirk Cameron became a born-again Christian. He started requesting script changes to eliminate risqué content, and insisted that fellow cast member Julie McCullough, who played the family's nanny (and Mike's fiancee), Julie, be fired due to her past appearances in Playboy. In 1991, executive producers Dan Guntzelman, Mike Sullivan, and Steve Marshall quit after Cameron telephoned Bob Iger, who was then president of ABC Entertainment, and accused them of being "pornographers". The show was cancelled the following year.

Growing Pains was also notable for its use of both Soap Opera Rapid Aging Syndrome and Cousin Oliver to combat the aging of the series regulars. Jeremy Miller, who played Ben, outgrew the role of precocious child, but didn't seem able to replace now-adult Kirk Cameron as a teen heartthrob. Chrissy, the baby the Seavers had in 1988, went from infant to school-age over the summer of 1990. In the show's last season, Mike went into teaching and brought orphaned teen Luke (played by Leonardo DiCaprio) home for the Seavers to adopt.

The series spawned one Spin-Off, Just the Ten of Us, launched by Poorly Disguised Pilot.