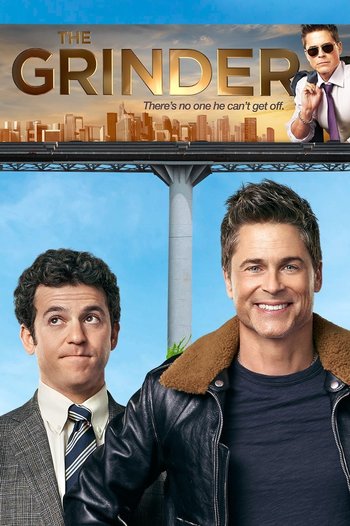 The Grinder is a series starring Rob Lowe and Fred Savage on Fox. Savage is Stewart Sanderson, a lawyer in Boise, Idaho. Lowe is Dean Sanderson, a former actor whose television series (called The Grinder) about lawyers has just been cancelled. Dean returns home to live with his brother, and 'helps' his brother practice law, thinking that if he played one on TV, he could do it in real life too.
Advertisement:

Stewart is supported by his loving wife, Debbie (Mary Elizabeth Ellis), and alternately helped and hindered by his father, Dean Sr. (William Devane), his daughter Lizzie (Hana Hayes) and his son Ethan (Connor Kalopsis). His coworkers include Todd (Steve Little) an incompetent yesman who's more interested in Dean than practicing law, and Claire (Natalie Morales) a remarkably good lawyer who's the only woman impervious to Dean's charms.

This Show Provides Examples of: