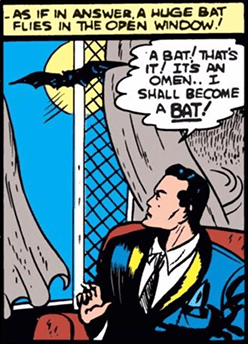 Yup. Criminals are the superstitious ones.
Wilson: I've just given you the answer, haven't I? And now you're going to walk out of here without saying a word.
House: [walking out the door] Nope.
— House, episode "Joy"
Advertisement:

All complex problems are solved by sudden epiphany!

In every Locked Room Mystery, the detective can't solve the crime just by examining the relevant evidence. They always need some external inspiration (apparently) completely unrelated to everything, something along the lines of:

Sharona: Oh well, looks like you don't solve the crime. Whatever. Let's go get milkshakes.
Monk: Milkshakes… The killer is lactose intolerant. So is the victim's ex-wife! Of course!!

Bob: No tea, please.
Dave: That's how that letter found its way twenty miles to a dead man in Sudbury!

Can take the form of a Flashback-Montage Realization and will lead directly to The Summation, unless there's an Evidence Scavenger Hunt in between. Often the character having the epiphany will tell the person whose offhand remark inspired it that they're "a genius" or the like; the remarker will then variously nod in a befuddled manner, ask "I'm what?", or simply demand an explanation. A character who wants clarification about what they just heard will often ask the other person to Repeat What You Just Said.

Named for perhaps the most famous non-detective related example, Archimedes' exclamation of "Eureka!" after jumping into a bath and realizing that held the key to the problem he was trying to solve. (See below for details.)

The Eureka Moment shows up a lot on diagnosis-mystery medical shows, such as House, in which he does it in nearly every episode, and in the first episode of Grey's Anatomy, which isn't even a medical detective show! It may also show up on telenovelas or soap operas with some ongoing secret that defines a character or even the main plot. The truth is often almost revealed several times, by easily overheard conversations or weak evidences, and each time the status quo is kept with some contrived explanation. When the Eureka Moment takes place, The Reveal is not the result of a confession or an evidence that is too solid to be ignored, but instead the result of the hero putting all the small hints together and figuring out the truth by himself. In this case, expect a wave of several flashbacks of those hints before the "Eureka!".

Not to be confused with a Bat Deduction. While both can initially appear almost identical, a Eureka Moment leads to a coherent chain of reasoning that the detective can explain to the bystanders later; whereas a Bat Deduction, if it gets explained at all, makes even less sense after the explanation. However, although logically sound, the Eureka Moment may be enough to convince the one who came to it, but not to convince others (specially a court of law). In this case, the character may began a quest to obtain a Smoking Gun to prove things beyond any reasonable doubt.

Often used as a Deus ex Machina, albeit one that is acceptable more often than annoying. If the detective actually takes the idea literally rather than uses it as an inspiration, that is I Was Just Joking. Can even happen in your sleep, with Dreaming the Truth.

Compare Luck-Based Search Technique and You Were Trying Too Hard. See Placebo Eureka Moment for when there wasn't any external inspiration, but they act like there was, and Love Epiphany, when the insight gained is that one party loves the other. See also Explain, Explain... Oh, Crap! for a similar situation where instead of finding a solution, someone becomes aware of a problem.

Palpatine is the Dark Lord

After so, so many hints, Anakin finally realizes that senator Palpatine is the elusive Sith Lord the Jedis were seeking.

Palpatine is the Dark Lord

After so, so many hints, Anakin finally realizes that senator Palpatine is the elusive Sith Lord the Jedis were seeking.