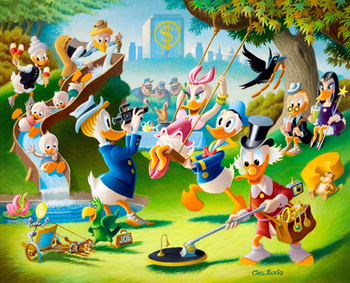 Holiday in Duckburg by Carl Barks

From the Disney Comics centering around Scrooge McDuck and Donald Duck. The major works were by Carl Barks and Don Rosa. This also includes the DuckTales franchise.

This is a key part of the Disney Mouse and Duck Comics, which is a Modular Franchise that's formed when this Verse is used in tandem with the Mickey Mouse Comic Universe.

See Carl Barks and Don Rosa for Tropes specific to their stories. Numerous other authors in both America and Europe have written stories set in this universe with some of the more notable and popular ones being Al Taliaferro, Romano Scarpa, Marco Rota, Tony Strobl, Vicar, Daan Jippes, William Van Horn, Fecchi and Silvia Ziche. As such, there's a LOT of diversity between stories depending on who wrote them.

Stories set in the Duckburg universe with their own pages:

Disney Ducks Comic Universe is the Trope Namer for: