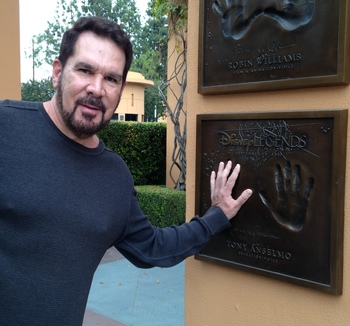 Tony Anselmo (born February 18, 1960) is an American animator and voice actor who has worked for Disney since 1980.

He is best known to audiences as the official voice of Donald Duck, a role he has held since 1985, following the death of Donald's originator Clarence Nash. Nash personally taught Anselmo how to perform Donald's voice during the years leading up to his death, so that Anselmo would eventually succeed him in the role. Anselmo was unaware of Nash's motive at that time, however, as he just wanted to learn the voice for fun.

Anselmo has portrayed Donald in all Disney works since Nash's passing, with the exception of Mickey and the Roadster Racers/Mickey Mouse Mixed-Up Adventures, where Donald's voice was provided by Daniel Ross since Anselmo was too busy working on Mickey Mouse (2013), the 2017 reboot of DuckTales, and Legend of the Three Caballeros. He has also occasionally portrayed Donald's nephews, Huey, Dewey and Louie.