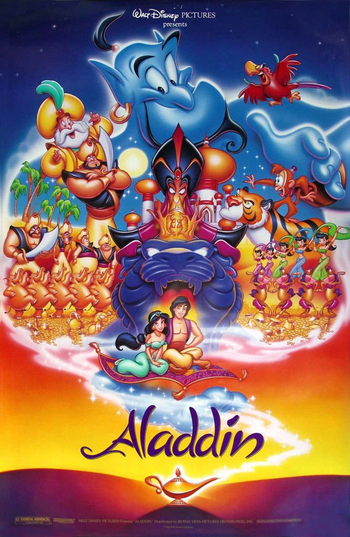 Let me share this whole new world with you…
"Oh, I come from a land
From a far away place,
Where the caravan camels roam.
Where it's flat and immense,
And the heat is intense!
It's barbaric, but hey it's home.
When the wind's from the east,
And the sun's from the west,
And the sand in the glass is right,
Come on down, stop on by, hop a carpet and fly
To another Arabian Night!"
— "Arabian Nights"
Advertisement:

Aladdin is the 31st entry into the Disney Animated Canon. Released on November 25, 1992, the film is a loose adaptation of the Thousand and One Nights tale of "Aladdin and the Wonderful Lamp".

Taking place in the fictional Arabian city of Agrabah, the title character, a Street Urchin, meets and falls in love with the Rebellious Princess Jasmine—until he's arrested, by orders of the evil vizier Jafar, to acquire a magic lamp which is hidden in a cave only Aladdin can enter. Although Jafar has nothing but the worst intentions, Aladdin uses his magical allies—a sentient Magic Carpet and a huge blue Robin Williams—to court the princess, expose Jafar, and save the day.

The film received a series of continuations in the form of a franchise. Needless to say, its biggest contribution was to permanently establish in Western Animation the value of star power in casting voice actors.

Aladdin was inspired very heavily by The Thief and the Cobbler, with several sequences being direct references to said unfinished film. Designer Andreas Deja, in particular, had previously worked under Thief creator Richard Williams. The release of Aladdin contributed to Williams losing control of Cobbler, which was retooled to be similar to Aladdin and released without his final input. Cobbler subsequently bombed.

A theatrical adaptation was performed in 2011 and a Live-Action Adaptation was released in 2019, with Guy Ritchie as the director and Will Smith as the Genie.

You ain't never had a friend like these tropes:

"Made you look!"
Feedback

Genie jaw drops after he believes that he actually managed to make Jasmine fall in love with Jafar. Jafar rolls it back up for him.

Genie jaw drops after he believes that he actually managed to make Jasmine fall in love with Jafar. Jafar rolls it back up for him.