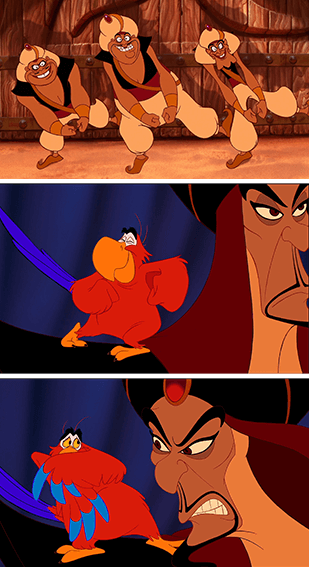 Sometimes, a musical number is simply so catchy that you forget who started it and you just have to hum along or dance to the tune. This trope comes in when a character who shows they like the music, is somebody of whom you wouldn't have expected it.

They might have reasons to dislike the person who started the musical number (this can range from being Sitcom Arch-Nemeses, to being on opposite sides in the battle between good and evil). Sometimes it's the subject of the song, like when a bad guy shows they like a "The Villain Sucks" Song or a ballad singing the praise of the heroes. Maybe they're The Comically Serious and they simply don't do music. And sometimes it can simply be that they think this is not the time or place for a musical number.

This is not an Involuntary Dance. People must be able to stop dancing/singing when they realize what's happening.

If this happens to a group, it will usually be The Ditz or Those Two Guys that exhibit the trope. Expect The Lancer or a Bad Boss to put a quick end to it, possibly with a Death Glare.

Differs from Got Me Doing It in that Got Me Doing It is triggered by a constantly repeated behaviour, while Actually Quite Catchy is a reaction to the music that's being played now, and typically for the first time.

Compare Actually Pretty Funny and The One Thing I Don't Hate About You. See also Attention-Deficit Disciple, who is especially prone to doing this.

Source of the page image. The "Prince Ali" number from "Aladdin" is so catchy that Jafar's parrot Iago dances along, but he is forced to stop abruptly when Jafar takes offense.

Source of the page image. The "Prince Ali" number from "Aladdin" is so catchy that Jafar's parrot Iago dances along, but he is forced to stop abruptly when Jafar takes offense.